New Alpina fettled 5 Series hits the UK market, with an M5 rivalling price tag and available as an estate 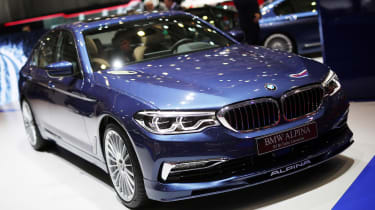 Ahead of BMW’s new, next-generation, 592bhp M5 hitting showrooms in March, Alpina has already launched its own take on the format in the form of the B5 Bi-Turbo. Revealed earlier this year at the Geneva Motor Show, it's available in both Saloon and Touring variants. UK prices have been revealed, starting at £89,000 for the B5 Saloon, and £91,000 for the car in estate bodied B5 Touring.

The Alpina B5 makes use of a tuned version of the 4.4-litre twin-turbo V8 engine found in the M550i and 7 Series-derived Alpina B7. Power steps up dramatically, from 455bhp in the standard BMW product to 600bhp. 800Nm of torque is on tap too, so the B5 does 0-62mph in a claimed 3.4 seconds (3.5 seconds for the Touring), with top speed clocked at 205mph. The German specialists claim that the £91,000 B5 Touring is now the world’s fastest production estate.

Power is transferred to an all-wheel-drive system via an eight-speed automatic gearbox. The all-wheel-drive system is BMW’s X-Drive setup, though Alpina has tweaked how it distributes torque to cope with the new, boosted power figure. There’s also a new active rear steering system, which angles the rear wheels 2.5 degrees opposite to the front wheels at low speeds, and the opposite way at high speeds for further stability. 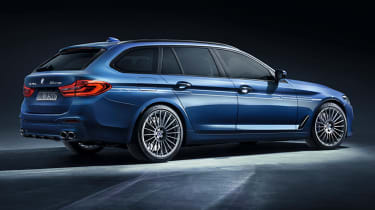 To make the B5 stand out against its regular 5 Series siblings it gets a smattering of Alpina styling goodies. Trademark multi-spoke wheels 20-inches in size are equipped. A new chin splitter emblazoned with free-floating Alpina lettering is attached to the front apron, alongside new side skirts and a revised rear bumper, which is home to the four tailpipes of the Alpina sports exhaust system.

Inside, the B5 features Alpina’s handcrafted leather upholstery and top end 5 Series equipment, inducing the latest BMW infotainment, navigation and communication systems. A digital instrument display is standard too, which is illuminated in Alpina’s distinctive blue shade. 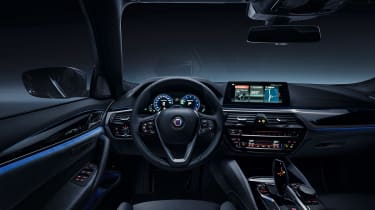 With no plans for an M5 Touring in the works, the Alpina B5 Touring will be the closest thing you’ll get to a pureblood M-division version of BMW’s latest estate. With the upcoming M5 costing £87,160, the Alpina B5 is slightly more expensive, but it does offer slightly more power than the standard super-saloon

Alpina B5 or BMW M5 - which one would your money go on? Answer in the comment section below!