Ariel HIPERCAR project will see firm offer hybrid hypercar from 2020 with either 590bhp or 1,180bhp 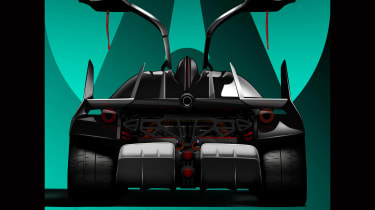 Somerset based sports car manufacturer Ariel has revealed plans to create an ‘ultra-high performance’ range extended hypercar, which is currently being developed under the name of HIPERCAR but could take on the Elektron name when it arrives in 2019.

Standing for High Performance Carbon Reduction, HIPERCAR is currently the working title for the project and won’t be the finished car’s name. However, patent archives reveal that Ariel has trademarked Elektron, which would make sense as a production name given the hypercar’s electrified nature.

The project began in 2014 as a stargazing study to investigate the future direction of the small British brand, and how it could expand its product line-up beyond the Atom and Nomad. The result of the study is HIPERCAR, and we’ll get to see the first prototype vehicles early next month.

While the design of the car has yet to be finalised, Ariel has released a handful of teaser images hinting at the direction it will take with initial prototypes. The pictures suggest a car quite different to the exoskeleton-based Atom and Nomad, with extreme looking bodywork panels, aerodynamic cuts and fins, and even gullwing style doors. 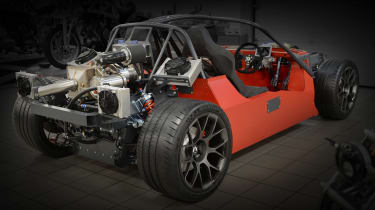 It will be Ariel’s first model to feature a substantial body and closed cockpit, using a mixture of lightweight materials and carbon fibre for construction. It will sit on a new lightweight folded and bonded aluminium structure, with outboard adjustable suspension.

Inboard-of-wheel motors developing a claimed 295bhp will provide power, each boasting 450Nm of torque. Both all-wheel-drive and rear-wheel-drive versions of the new hypercar are under development, meaning a range-topping model with 1,180bhp will line up against a rear-wheel-drive car with 590bhp. Ariel claims peak performance figures of 0-60mph in 2.4 seconds and a limited top speed of 160mph. The motors have been developed under the HIPERCAR project in collaboration with specialists Equipmake and Aim Co Japan.

Alongside the two-drivetrain options, two battery packs have been developed for the HIPERCAR. The all-wheel-drive model will make use of a 42kWh size cell, with the less powerful rear-wheel-drive version targeting longer range with a 56kWh capacity battery pack on board.

Range extender technology is applied through the addition of a 35kW gas turbine motor sitting above the rear motors. It runs at a fixed 120,000rpm, charging the batteries. Plug-in capabilities will feature on the finished car too, which will enter full production in 2020.

What do you think of Ariel's electric hypercar plans? Let us know in the comments!