Production of Aston Martin’s new twin-turbo V12 engine has started in Cologne, Germany, with the first DB11s due in showrooms this autumn 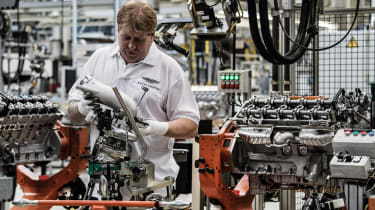 Production of Aston Martin’s all-new 5.2-litre twin-turbo V12 has begun at the Aston Martin Engine Plant (AMEP) in Cologne, Germany. The engines are initially destined for the DB11 sports car, with first deliveries this autumn.

It is the first turbocharged engine in the company’s history, and marks a new chapter for the manufacturer. The first ‘Job 1’ DB11 engine was completed this week and signed off at the end of the line by CEO Andy Palmer.

Designed in-house, the completed engines will travel by road to Gaydon in Warwickshire where they’ll find their way into the brand’s new GT. At the current rate of one shift per day, Palmer claims the plant can build more than 130 engines each week. The company is targeting 7,000 new cars per year over the next few years, ramping up to a maximum capacity of 14,000 by the end of the decade. 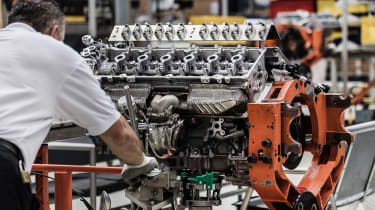 The plant first opened in 2004 and is home to more than 100 highly-trained employees. It sits on the same site as Ford’s Fiesta production facility and has processed approximately 40,000 V12 engines over the past 12 years.

Palmer commented: “AMEP is one of our great success stories and one of the jewels in the Aston Martin crown. To have the ability to design and then manufacture our own high-performance engines in-house is something very special.

“I have no doubts that our new twin-turbo V12 is the start of an even greater era of success”, he said. 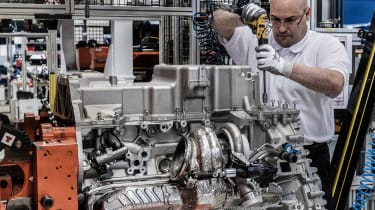 Chief powertrain engineer Dr Brian Fitzsimons shared Palmers enthusiasm for the new V12: “It’s a hugely exciting time to be an engineer at Aston Martin, not least because this is just the beginning for the new twin-turbo V12”.

This considered, he assured us the new engine has been future proofed for electrification, as well as being “proven to 820bhp” - leading the way for a new, more powerful Aston Martin Vanquish in 2018. The engine will also launch in the DBX crossover before 2020, which will be built at the brand’s new site in St Athan, Wales.

The facility will continue to build naturally aspirated V8 and V12 engines for the Vantage, Vanquish and Rapide S, alongside the new turbo V12 for the DB11 sports car.

Are you excited about Aston Martin's new twin-turbo V12 engine? Let us know below...