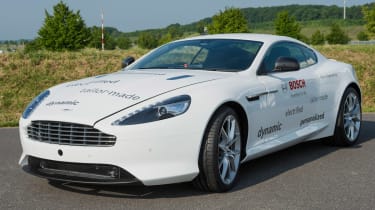 This is an Aston Martin DB9 with a difference. It’s a plug-in hybrid technology demonstrator built by German firm Bosch Engineering in conjunction with the British supercar maker.

The project was pitched to Aston Martin by Bosch as a way of showing how hybrids can improve the driving dynamics of a sports car. And due to the close relationship the companies share, Aston agreed to supply a new DB9 for the project.

The DB9 keeps the familiar 6.0-litre V12 under its bonnet, supplemented by electric motors that boost total power output from the current 510bhp to "over 740bhp."

Two motors power the front wheels, making this the first four-wheel drive Aston Martin, while the 180kW lithium-ion battery that powers them sits towards the rear of the car, ahead of the axle. The hybrid system adds a total of 300kg to the DB9’s 1,785kg weight.

Work began in April 2012, and Bosch has had 74 engineers working on the car. The DB9 was supplied by Aston Martin in November 2012, and was finished at the end of May.

The DB9 will now begin performance testing. Early simulations indicate that the car should cut the DB9’s 0-62mph time from 4.6 seconds by at least 20 per cent, and give an all-electric range of over 16 miles.

In addition to the boost in straight line performance, the motors allow torque vectoring for sharper handling, while the car also benefits from Bosch’s latest ESP system that has four modes – safe, sport, drift and custom.

The latter allows steering, throttle and under or oversteer characteristics to be tuned with incredible accuracy by the driver, taking into account tyre temperatures, tyre conditions and number of passengers in the car.

The system can also be connected to the internet, allowing the driver to download the best settings for a particular track.

Bosch has also developed bespoke TFT dials and an in-car touchscreen for the Aston. The screen is used to control the car’s driving behaviour and display the status of its hybrid powertrain.

An Aston Martin spokesman told us that the hybrid system isn’t destined for production – and neither is the hydrogen hybrid system used in the Rapide S that raced in this year’s Nurburgring 24-hour race.

Instead, it shows one direction for hybrids to take in the future, and one that fits in with Aston’s brand values.

Meanwhile, Bosch is using the project to showcase its sports hybrid technology, all of which is modular so car be used by different carmakers and tuned to suit their needs.