The fastest V8 Vantage ever arrives in the shape of the Aston Martin Vantage GT8. Only 150 will be built and the price is £165k 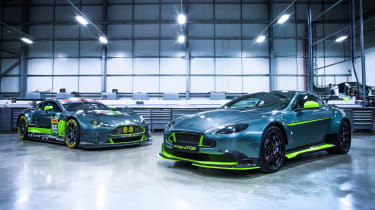 Aston Martin has introduced its latest track-bred GT car: the new Aston Martin Vantage GT8. Following on from the exclusive Vantage GT12 revealed last year, the GT8 is heavily inspired by the V8 Vantage GTE racer. Only 150 examples will be built at £165,000 apiece, but you'll be lucky to get your hands one one as they've almost completely sold out.

What that price tag gets you is the lightest, most powerful V8 Vantage that Aston has ever made. It’s heavily inspired by the V8 Vantage GTE racer, with the British sports car maker focusing heavily on aerodynamics and weight saving for the exclusive new model.

Aston has used carbon fibre wherever possible to help keep weight down as much as possible. The front splitter, bumpers, sills and rear diffuser have all been made using the super-light material, and is a hefty nod to the GTE race car it's inspired by, plus the same free-flowing cutaway on the front wheel arch. 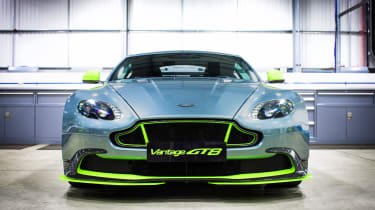 The weight saving elements also extend to the interior where Aston has fitted carbon fibre bucket seats and door panels. All together, Aston has managed to strip up to 100kg from the V8 Vantage if you spec all of the individual options. The GT8 tips the scales at 1,510kg – 55kg less than its bigger brother, the GT12.

For those that want the full race car look, an optional Aero Pack brings a larger rear wing and additional corner elements to the front splitter. A carbon fibre roof, polycarbonate rear windscreen and titanium centre mounted exhaust can also be added from the options list. With all of the lightweight extras fitted, the GT8 nudges £200,000 – almost double the price of a standard V8 Vantage – but Aston insists the GT8 is ‘genuinely road-useable’, with air conditioning, a 160w audio system, and the latest AMi II infotainment setup with sat-nav and Bluetooth as standard. 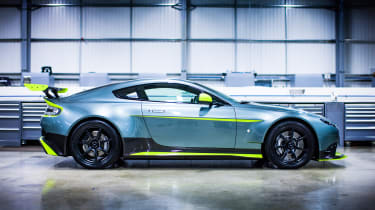 Elsewhere, the GT8 gets a new five-spoke alloy wheel design – lightweight, seven-spoke magnesium wheels are also an option – while three colour schemes are available and include Stirling Green and Lime (pictured), China Grey and Blue or Stratus White and Green.

Under the nose is Aston’s tried and tested 4.7-litre naturally aspirated V8 developing 440bhp and 490Nm of torque. It can be paired with either a six-speed manual gearbox or Aston’s seven-speed Sportshift II automatic. Fitted with the manual box, the GT8 gets from 0-60mph in 4.4 seconds and continues on to a top speed of 190mph.

Aston Martin CEO Andy Palmer Q and A on the GT8

Was it always the plan to give the V8 Vantage the ‘GT’ treatment like the GT12 version of the V12 Vantage?

“Well, our plan calls for two special editions per year. The GT12 was pretty much on the books when I joined and it was phenomenally successful. I’d love to say there was a masterplan but actually we saw how well that did and realised there was room for something else even closer to the (V8-engined) WEC race car.”

“We’re getting a lot of conquest and returning customers – some who maybe bought an early DB9 and are now coming back to the brand. It’s a mixture of enthusiasts and investors – the GT12 has only gone up in value since its release, which makes the GT8 a very attractive prospect.”

How different is it to the standard Vantage?

“Pretty different – the wick has been turned up on the engine, large parts of the body are carbon-fibre and the suspension has been retuned as well, all to offer a sharper, more involving experience.” 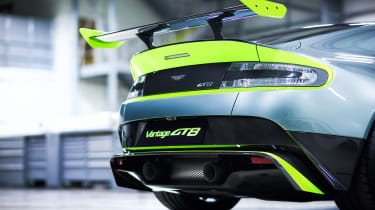 How does it fit into the range alongside the GT12?

“It’s the baby brother, really. It’s not as expensive or extreme, but the V8 means it’s more closely related to the WEC race car you see on track.”

So what is the second special due this year? Is it based on the DB11?

“It’s going to be pretty special, but I can’t say more than that. It won’t be based on the DB11, it’ll be based on one of the more established models.”

Would you like a Vantage GT8 on your driveway? Let us know in the comments...