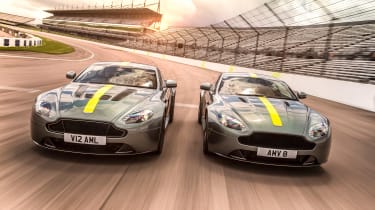 Aston Martin has launched a new version of the V8 and V12 Vantage sports cars under its new AMR branding. AMR stands for Aston Martin Racing, the name of the British marque’s racing outfit established in 2004.

There are two types of AMR model - AMR and AMR Pro. The first are special edition models with minor changes, but AMR Pro cars are much more heavily biased towards track driving and are produced by Aston Martin’s ‘Q’ division. The Vantage AMR Pro was revealed at the 2017 Geneva Motor Show, and got a more powerful engine as well as new chassis and aero parts.

This new Aston Martin Vantage AMR celebrate the brand’s success in GT4, GT3 and GTE racing, and is available with the existing 430bhp V8 or 595bhp V12 engines with either automatic or manual gearboxes. The special edition cars get a special paint scheme, and buyers can choose from white and orange, black and blue, blue and red or silver and grey. 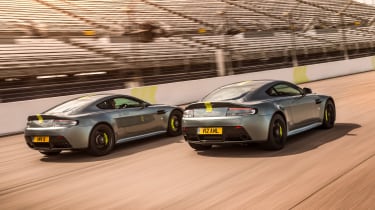 There’s also a ‘Halo Pack’ that has a Stirling Green finish with lime green accents, based on Aston’s Vantage GTE race car, as well as a Union Jack Aston Martin badge as a no-cost option. The interior is designed to match the exterior, combining different types of leather and Alcantara, plus contrasting coloured accents, to complement the various paint jobs.

Carbon fibre seats are available as an option, plus other lightweight carbon trims such as the front grille, mirror caps, door pulls and instrument surrounds. Other options include several finishes for the alloy wheels and a new aero kit. 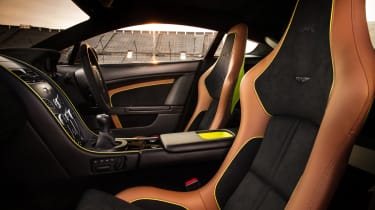 This adds a new front splitter and a fixed rear wing, both made from carbon fibre, and a titanium exhaust that saves 14kg over the standard system.

Global production is limited to just 300 cars, with 100 V12s and 200 V8s set to be built. Aston Martin CEO Andy Palmer said: “Limited production numbers will undoubtedly make [the Vantage AMR models] extremely collectible, but they’re so good to drive I’m confident we’ll see many of them being enjoyed both on the road and at track events around the world.”

Coupe and Roadster versions of both will be available when deliveries start in late 2017, and prices start at £97,995.

Do you like the look of the new Vantage AMR editions? Let us know in the comments section below…