We get behind the wheel of radical looking off-road evolution of the new Audi A4. 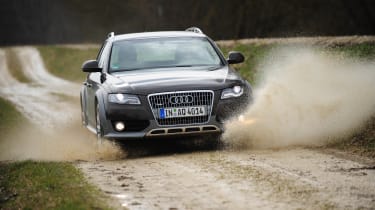 At first glance the A4 allroad appears to be a nothing more than a money-spinner. But spend some time behind the wheel and this pseudo-off roader starts to make sense. The interior offers the same level of luxury as the standard car, with all the creature comforts and peerless build-quality we’ve come to expect from Audi, while the range of engines are as powerful, smooth and frugal as ever. The jacked-up suspension gives the allroad and even better ride, and when it comes to the rough stuff it’s not left wanting either. An off-road ESP and near Q5 rivaliing ground clearance make sure it has the mud-plugging ability to match it’s rugged good looks.

It’s an estate that thinks it’s an SUV! The A4 allroad follows in the footsteps of the larger A6 allroad by equipping a plush family car with the ability to tackle the rough stuff. But do the dubious modifications bring anything new to the table and more importantly, can they justify the significant price hike?

The formula is fairly simple. Take an SE-spec A4 quattro Avant and raise the ride height by 37millimetres, giving it just 20 millimetres less ground clearance than the more rugged Q5. Then add an off-road ESP system and finish it off with more utilitarian plastic wheel arches and rugged bunpers.

Joking aside though, the beefed-up looks are a success – giving the allroad a road presence that the standard Avant simply can’t muster, without attracting unwanted attention from the anti-SUV brigade. Take a closer look and Audi has also worked hard on the finer details which give this car a personality all of its own.

There are real stainless steel guards, to stop you crunching your underbody components on uneven ground, and the boot is full of useful nets and dividers. So whether your boot’s full of shopping or more extreme outdoor equipment it won’t be bouncing around in the back. And for the style conscious out there, the new optional 18-inch 10-spoke alloys look spot on.

As we’ve come to expect from Audi, the interior is a fantastic place to be. However, we wouldn’t recommend the colour combination of our test car unless your staying strictly on the tarmac. The light cream carpets were muddy within minutes, while the grainy wood trim was somewhat out of keeping with the car’s fundamental character.

Audi’s new iPod-inspired colour screen looks great, while the new dash-mounted eco-driving display is genuinely useful. Not only does it tell you which gear to be in, it warns you if the rear air conditioning is on when there are no passengers in the back, so there’s no excuse to waste fuel.

To boost its green appeal further 2.0 TDI also gets stop start, which works well, but is a bit aggressive on restart, sending vibrations through the cabin. But the diesel engine really suits the allroad’s workhorse nature, offering plenty of refined mid-range torque while keeping cabin noise to a minimum.

But the most impressive, and perhaps unexpected improvement is its ride. Historically German cars are setup to have a very firm, sporty ride, which is fine on the super-smooth Autobahn and during hard cornering, but pretty uncompromising on Britain’s scarred and rutted A-roads.

The allroad is different. Its raised ride height allows the suspension more travel, making the ride a softer and more supple. Quite simply it’s the best riding A4 you can buy.

And when you turn off the roads and hit the tracks, the allroad doesn’t disgrace itself either. It’s no proper SUV, but the offroad ESP system, as featured in the Q5, works well at keeping you moving in slippy conditions and it won’t bottom out unless the terrain gets really tricky.

Audi has a very precise target customer for the A4 allroad, and if the German firm has done its research right, the 350 examples it plans to sell in the UK in the remainder of 2009 will turn Audi a tidy profit.

A standard A4 Avant SE costs £26,000, whereas this 2.0-litre TDI allroad costs nearer the £30,000 mark. Audi also expects most customers add around £9,000 worth of options, so when you consider the relatively small development costs of this car it clearly an extremely shrewd move from Audi.

Rival: Saab 9-3x The beefed-up estate from Saab is actually one of the firm’s better cars. Avoid the diesel option though - it’s only available with two-wheel drive which defeats the object of the raised suspension