Audi unveils allroad version of new A4 Avant, ahead of European release in the summer 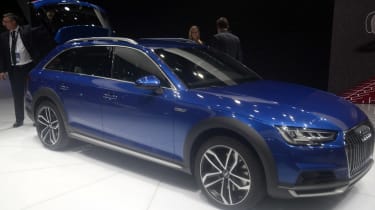 Audi has revealed its new addition to its rugged allroad range at the Detroit Motor Show, the A4 allroad quattro. Based on the newly released 2016 A4 Avant, its set to go on sale in the UK this summer.

It's hardly a radical visual departure from the previous A4 allroad, but then, neither is the standard new A4 dramatically different from its predecessor. The Allroad gets 34mm added to the ride height, protective body cladding and standard-fit quattro all-wheel drive to mark it out. 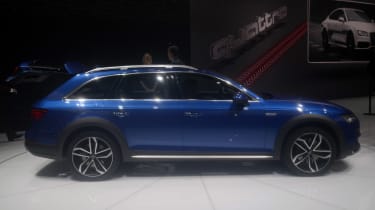 Notable styling revisions include the flared wheelarches with cladding stretching around the front and rear bumpers. Audi says they can be kept grey (as in the photos) or specced with the body colour of the car. The underbody guard and rear diffuser are finished in silver.

The grille slats are also changed from horizontal to vertical, while revised lower air intakes, 'allroad' badging and higher roof rails complete the look. Inside, its virtually identical to the regular A4 Avant, with a 505-litre boot seats-up and a standard-fit power tailgate. 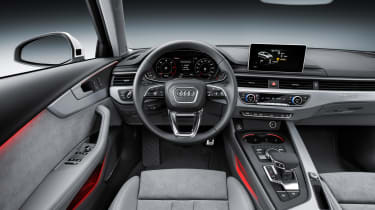 Both turbo petrol 'TFSI' and 'TDI' diesel engines will be available at launch. One petrol and five diesels will be available, with power ranging from 148bhp to 268bhp and the option of a six-speed manual, and a seven or eight-speed automatic. The new engines are significantly more efficient than before, with emissions reduced by up to 21g/km.

The suspension has been raised by 23mm, while the extra 11mm is made up by the increased diameter of the wheels and tyres. The allroad quattro also adds a new "offroad mode" to Audi's drive select system. UK pricing is unconfirmed, but the A4 allroad quattro kicks off from €44,750 in Germany.

Get more of our Detroit Motor Show 2016 coverage here...