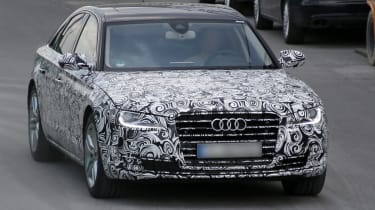 These spy shots reveal that a facelifted Audi A8 is on its way. Clad in a black and white camouflage below the window line, this prototype was spotted by our spy photographers out testing in Germany ahead of its unveiling later this year.

Despite the optical disguise, it is clear that a series of visual tweaks have been made to the executive limousine to help it take on the all-new Mercedes S-Class. At the front, a set of revised, slimmer headlights and a wider grille are the biggest changes, while the front valance now runs across the length of the front bumper.

The brand’s trademark ‘Russian doll’ styling approach is still apparent, though, with the broad-shouldered proportions of the current model still clear to see. The rear features a set of wide but flat rectangular exhausts similar to those on the 6.3-litre W12 flagship and they remain largely unchanged, however this test mule also hints at split rear lights joined by a single strip, a first for the A8.

While the exterior looks are not being overhauled, expect to see larger changes underneath, including a possible plug-in hybrid model that uses the same technology as the Porsche Panamera S E-Hybrid that is due to appear at the Shanghai motor show and claims to return 91mpg combined.

There is also speculation that a suggests the possibility of a high-performance range-topper to sit above the S8 as the RS8, providing a rival to the Mercedes-Benz S-Class AMG models; a market that Mercedes currently dominates thanks to its dedicated V8 and V12 models.

Expect a host of cutting-edge technologies to also adorn the big Audi, as VW’s luxury arm steps up its battle with the Mercedes-Benz S-Class, Jaguar XJ, Lexus LS and BMW 7-Series in the full-size luxury saloon segment. 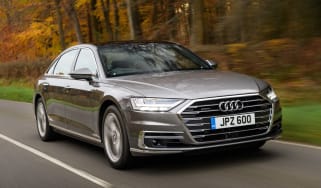 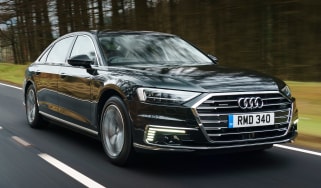