Audi’s new Q8 flagship aims to challenge at the top of the premium SUV class, so we pitch it against rivals from Porsche and Range Rover 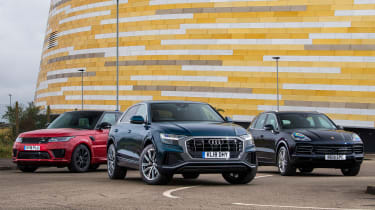 There are so many buyers splashing out on high-end SUVs that Audi has launched a new flagship, the Q8. Not content with the Q7’s presence in this profitable sector of the new-car market, the German manufacturer has introduced this more style-focused model to cater for drivers who don’t need the utility of a seven-seater.

However, there are a number of other alternatives vying for your attention and cash, two of which we’ve lined up against Audi’s latest offering here.

After Porsche’s decision to cease diesel sales, the new Cayenne range is all-petrol, with this E-Hybrid model supported by an electric motor to help boost performance and efficiency. Of course, it adds sportier styling and plenty of premium appeal into the mix, too.

We’ve also brought along the evergreen Range Rover Sport in recently facelifted form. It’s closer in concept to the Q8 and is fitted with a V6 diesel engine to match the Audi’s. These cars have to combine many different abilities, not least practicality, luxury and tech, so which comes out on top? 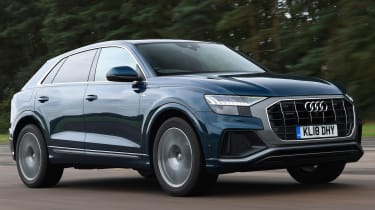 The Audi Q8 is an all-new model that sits at the top of the premium brand’s extensive SUV range, adding sportier styling into the mix. We’re testing the S line version, which costs £65,040.

A punchy 282bhp 3.0-litre V6 turbodiesel engine powers the Q8 in 50 TDI form, which is the only variant on offer. With 600Nm of torque it’s the weakest motor here in terms of output, because both rivals produce 700Nm, but that figure is still more than enough to make progress feel very swift.

The 48V mild-hybrid system fitted to the engine adds a hint of electric power to the mix. It’s nothing like the extra benefit found in the Cayenne, although it does mean the Audi’s stop/start system isn’t as invasive as the Range Rover’s. 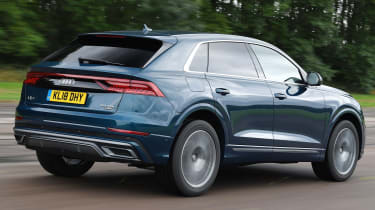 Thanks to the lightest kerbweight here, the Q8 put in a strong performance at our test track. While neither diesel SUV could match the incredibly-quick Cayenne, the Audi’s 5.7-second time to go from 30-70mph through the gears shows just how effortlessly quick it is. The Range Rover isn’t short of pace, taking 7.3 seconds to do the same, yet the Cayenne posted a blistering time of 4.0 seconds.

In gear, the Audi’s V6 engine is strong and smooth, pulling effortlessly at motorway speeds, which is where all three of these cars feel most at home. It’s nearly as quiet as the Cayenne’s petrol engine at speed, while the strong low-down torque means it’s easy to make relaxed progress in the Q8.

At high speed the Audi’s ride is also soft and therefore comfortable, smothering imperfections on motorways and dual carriageways. However, that’s true of the Range Rover as well, but both of these cars fall behind the Porsche at lower speeds. All three SUVs are very comfortable, though, and you won’t be disappointed with any of them as a cruiser, but the Q8’s suspension doesn’t have the level of body control of the Porsche’s. You notice the ride getting choppier as the speed rises and the road surface deteriorates.

Testers’ Notes: “Audi’s quattro system provides permanent four-wheel drive with a locking centre differential, but it’s unlikely that many owners will do any serious off-roading. The Range Rover is more capable.” 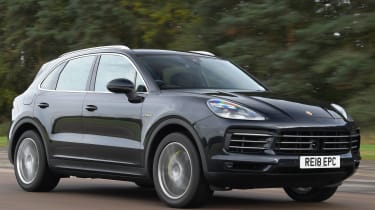 This is the first time we’ve featured the new Porsche Cayenne in a road test. There’s no diesel version available, so we opted for the efficient E-Hybrid model to take on the Q8 and Range Rover Sport. It’s priced from £68,423, and because it costs more than £60,000 the Porsche doesn’t qualify for a Government plug-in car grant.

The Porsche is a stand-out winner in this class when it comes to ride and handling, both of which are superb for such a large, heavy SUV. It’s more fun than you’d think on a twisty road thanks to the sharp steering, great body control and plentiful grip.

This is also partly down to the powertrain: the eight-speed auto box shifts quickly when you want it to and smoothly when you don’t. On top of that, the 700Nm total torque output from the electric motor and V6 petrol unit delivers rapid acceleration. 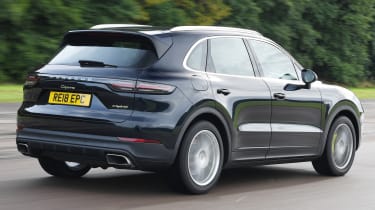 On the track, the Cayenne beat both rivals here easily, even in soaking wet conditions: its 4.5-second 0-60mph time is brilliant for a heavy, high-riding car that also prioritises efficiency. It was faster in gear than the other cars in every test; the 2.1 seconds it took to cover 30-50mph was particularly impressive.

The petrol engine is also nicely refined, offering hushed cruising and a muted V6 note when you use the performance and therefore the revs. It runs silently in electric mode for up to 27 miles as well, so there’s no loss of refinement. However, when on a motorway the Cayenne is a little louder inside than the Q8 due to tyre roar.

For all this performance and driver appeal, you might think the Porsche sacrifices ride comfort, but it’s actually the most comfortable car of the three. While the ride isn’t perfect, it’s smoother more of the time than both of its rivals here, and the excellent driving position means it’ll be the best for a long trip, aside from the poorer economy on longer runs.

Testers’ Notes: “A 3.6kW charger and three-pin plug come as standard, with a faster 7.2kW charger and Type 2 cable optional. A recharge should take around seven hours and 50 minutes, or two hours and 20 for a faster charge.” 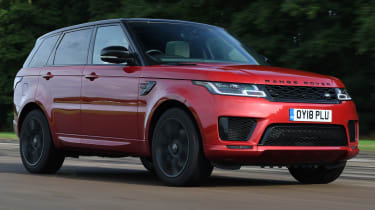 This is the first opportunity we’ve had to test the facelifted Range Rover Sport, but with more technology and fresher styling compared with the previous model, including a new infotainment system, can the £67,500 SDV6 HSE (our pictures show an HSE Dynamic model) take victory here?

Standard-fit air suspension means there’s a good range of ability in the Range Rover, but it’s still easily the least dynamic car, with a focus placed more on cruising comfort. Well-weighted steering and a punchy engine add to the car’s on-road appeal, too.

It doesn’t have the versatility of the Cayenne, which is more comfortable and better controlled than the Sport as well. And while the Q8 is a little more unsettled at high speed, the Range Rover’s medium-speed ride is the worst of the three cars, because it bounces in and out of potholes and bumps with more of a thud. However, that issue is better resolved at lower and higher pace, because around town and on the motorway the Range Rover is very comfortable. 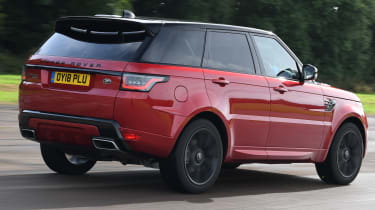 It’s the Sport’s strong engine that holds the most appeal here, because with 302bhp and 700Nm of torque it’s powerful. It managed 30-50mph in fourth gear in 3.6 seconds, and while that was slower than the 3.1 seconds it took the Q8 and the hybrid Porsche’s 2.7 seconds, it still feels reassuringly muscular. In seventh gear it went from 50-70mph in just 7.1 seconds, quicker than the Audi (9.6 seconds) but still behind the Porsche (5.7 seconds).

That translates to strong performance on the motorway, because getting up to speed on sliproads is effortless. The engine is marginally more noticeable than the Q8’s V6, and the eight-speed automatic transmission holds on to gears longer.

One of the Range Rover’s downfalls is its high 2,178kg kerbweight, which reared its head in our braking tests: from 70mph the Sport took 58.1 metres to come to a standstill, while the lighter Audi completed the same test in just 43.5 metres, with the Cayenne between its two rivals. The British car’s bulk dents performance and handling, too.

Testers’ Notes: “The Range Rover Sport feels bigger than it actually is from behind the wheel, because you sit very high up. Some drivers will like that, because it gives a commanding view of the road.” 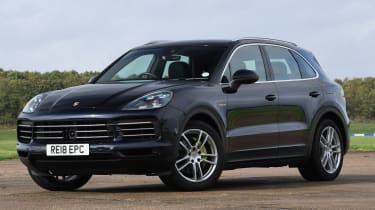 This is quite a close result, but the Cayenne edges it. It offers great infotainment and usability, and is more comfortable in more situations, yet it’s also more fun to drive and significantly faster. The car is more economical and will be a big chunk cheaper to run for business buyers. It has the potential for huge fuel savings if your commute is short enough to use electric power only, too. 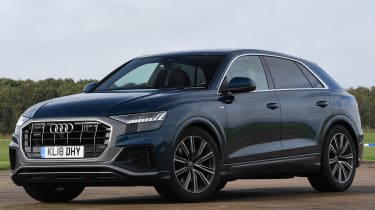 Choosing between the Audi Q8 and Range Rover Sport will be tough, and it’s likely to come down to whether you want more space for passengers or luggage. It’s the former in the Audi that nudges it ahead here, because occupants won’t just have more legroom, they’ll also enjoy a more modern cabin that’s quieter and better equipped than the British car’s. 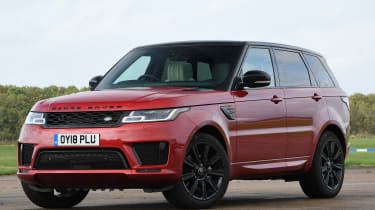 The Range Rover Sport is as desirable as ever thanks to its torquey engine, plush interior and updated infotainment. It has a huge boot and the option of seven seats if you need them, but in five-seat form it loses out to the Audi by a hair. Part of that is to do with performance and handling, while it’s also not as efficient as either competitor, so will cost more to run. 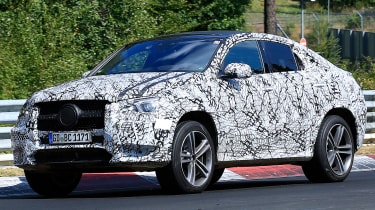 The recently-revealed Mercedes GLE will spawn a Q8 rival in the form of a Coupé variant, which we’ve spotted in testing. This will use engines from the GLE, including a six-cylinder diesel unit in the 350 d model when it arrives.