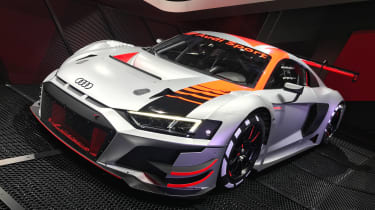 Audi Sport has unveiled an updated version of its all-conquering R8 LMS GT3 racing car at the 2018 Paris Motor Show, and it gives us some clues about how the facelifted R8 road car will look. The mid-engined racer is an evolution of the existing R8 LMS, so much so that existing customers will be able to buy an upgrade package to bring their cars up to the same spec as the new one.

Up front, the LMS has the familiar R8 LED light signature, but now has three air intakes between the lights and below the bonnet line. That's similar to the nose treatment given to the recently revealed Audi A1, and harks back to the intakes seen on the Group B Audi Sport Quattro. The rest of the updates to the LMS focus on a new aerodynamic package, which is designed to optimise airflow and cooling of the mid-mounted V10. Huge cut-outs at the back allow hot air to escape quickly, while the LED tail-lights have been given a subtle update.

Under the skin, the 5.2-litre V10 remains largely unchanged - GT3 racing uses a balance of performance system to keep all cars on an equal footing, so there was no point in Audi chasing power figures. However, the clutch and transmission have been made more durable to increase service periods, which will help keep running costs down for racing teams.

The new R8 LMS GT3 is available for sportscar teams to buy now for 398,000 Euros (plus taxes), while the upgrade package for existing LMS owners is a reasonable 28,000 Euros. The new model will have a tough act to follow, as the current R8 LMS GT3 has a number of wins under its belt, including the famous Spa and Nurburgring 24 Hours, the Bathurst 12 Hours in Australia, as well as numerous regional championship wins under its belt.

The revised Audi R8 road car has already been spotted undergoing development testing and we can see some of the GT3 racer's look in the spy photographs. As well as the redesigned front bumper, a new rear bumper incorporating an aerodynamic diffuser is the other key design change. We understand that the charismatic V10 engine will remain as the only R8 power option.

Get all the latest from the 2018 Paris Motor Show here...

Welcome to our Paris Motor Show hub page. Scroll down for all our Paris content...
Audi R8 review 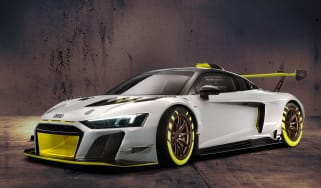