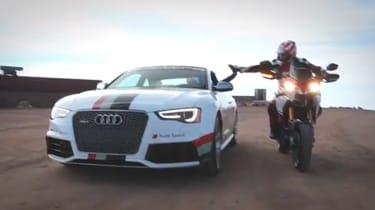 Last week, a teaser image of what appeared to be an S1 Quattro-inspired Audi RS5 was released, just in time for the 25th anniversary of its record-breaking run at Pikes Peak. Audi has since revealed the special-edition RS5 in full, at the legendary hill climb in Colorado.

The special RS5 Coupe appeared alongside a Ducati Multistrada 1200 S – following the tie-up between Audi and the Italian superbike maker earlier this year.

The video shows the two charging up the hill, which covers 12.42 miles and a climb of over 14,000ft. The Quattro livery appears to be the only modifications, to an otherwise standard RS5.

It marks 25 years since Walter Rorhl took a stripped out Audi Sport Quattro S1 up the hill, smashing his previous record by more than 20 seconds. 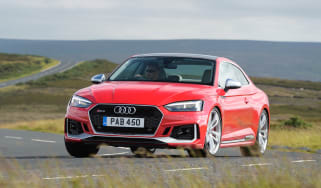 The Audi RS5 is an incredibly fast and comfortable coupe, but it’s not as fun as some rivals
Audi RS 5 Coupe and Sportback models get 2020 tweaks 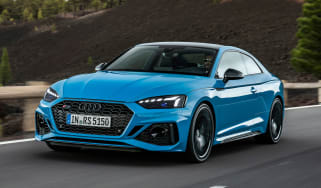