The Audi RS5 offers masses of performance and four-wheel drive, but a BMW M4 is faster in the corners 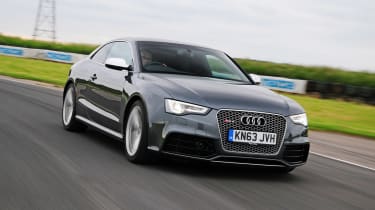 Audi can’t quite match BMW and Porsche for racing car heritage, but it’s been making up for lost time ever since the legendary Quattro broke cover in 1980. The brand now offers everything from a compact hot hatch to a full-blooded supercar, but it’s the sleek RS5 that’s closest in spirit to the famous eighties original.

With its smooth coupe lines, muscular V8 powerplant, grippy four-wheel-drive transmission and four-seater cabin, the Audi promises to be a supercar for all seasons.

The Audi RS5 was launched out to mark the 30th anniversary of the original Audi Quattro – and it builds on that car's reputation by offering even more power and technical sophistication. It rivals the BMW M4 and Mercedes C63 AMG, and has a 444bhp 4.2-litre V8 which drives all four wheels through a seven-speed automatic gearbox. It's incredibly capable in all weather conditions, but it's not the driver's car that Audi would have you believe.

You can tailor the steering weighting and throttle response using the Drive Select control, but none of the settings delivers a natural feel. Yet it’s not all bad news. Thanks to its strong grip, almost unbreakable traction and decent body control, the RS5 carries impressive speed through fast corners and fires out of slower bends like a rocket.

Better still, the clever Sport differential can send torque to individual rear wheels, helping to reduce understeer and improve turn-in – although it can act aggressively in tight corners.

Another highlight is the Audi’s 4.2-litre V8, which is taken from the brilliant R8 supercar. The mighty 444bhp V8 has tremendous shove – it revs to 8,250rpm and rockets the RS5 from 0-62mph in just 4.6 seconds, and is backed up by a thunderous bark and rumble from the exhausts. Yet it can also be remarkably quiet and docile.

Away from the track, the Audi feels a little limp at low speed, but once the revs climb above 3,000rpm it really flies. The impression of speed is heightened by the rapid-fire seven-speed S tronic twin-clutch gearbox, which serves up silky smooth shifts in auto mode and crisp changes via the steering wheel-mounted paddles.

When you’re not attacking back roads, the Audi is a remarkably composed grand tourer. There’s little wind noise, while the V8 engine is ticking over at just 2,400rpm at 70mph. And sticking with the standard 19-inch alloys helps take the edge off the stiff low-speed ride.

Put it in Comfort, and it's a big pussy cat. Put it in Dynamic mode and it generates so much grip in corners, it almost takes the tarmac with it. That's thanks to a rear sport differential and a new centre diff that can send up to 85 per cent of torque to the back wheels. For all that technology, though, the steering never has that much feel and the brakes – while incredibly powerful – are numb at the top of the pedal's travel.

With claimed economy of 26.9mpg and CO2 emissions of 246g/km, the Audi RS5 will cost a lot in fuel and tax. Insurance and servicing should be quite steep too – but then the same can be said of the M4 and a C63 AMG. Residual values should be quite strong - the RS5 is relatively rare, keeping second hand prices high.

With hefty CO2 emissions of 246g/km and that high asking price, the Audi will cost higher-rate earners £8,259 a year in Benefit in Kind bills. However, Audi’s monthly servicing plan helps you budget for future maintenance.

In isolation, the RS5 has plenty of high-performance kerb appeal, but it appears a little ordinary parked alongside the pumped-up BMW M4.

Look closely, though, and you’ll spot plenty of racy additions that will get any car fan’s pulse racing. Like the original Quattro, there are enlarged wheelarches to accommodate the car’s wider track, plus the tailgate features a neat retractable spoiler that is automatically raised at speeds above 70mph. As with all S and RS-badged Audis, you get silver finish door mirror housings and xenon headlamps with LED daytime running lights.

You’ll find just as many sporty additions inside, including a flat-bottomed steering wheel, heavily bolstered sports seats, metal pedals and a smattering of RS5 logos. The rest of the interior is pure A5, which means a logically laid out dashboard, top-notch materials and impeccable fit and finish.Admittedly, the design is starting to look a bit dated, particularly the graphics on the MMI infotainment screen. Still, buyers can console themselves with the fact they get plenty of kit as standard. The comprehensive list extends to sat-nav, climate control, a DAB radio, Bluetooth and soft leather seat trim.

If you want a bit of practicality to go with your performance, then the Audi is worth a look. Like the M4 it’s a four-seater, and occupants sitting in the back get a decent amount of head and legroom, plus individually sculpted seats.

Elsewhere in the cabin you’ll find plenty of handy storage, including decent-sized door bins, a large glovebox and cup-holders located in the centre console. But the Audi’s trump card is its spacious boot. At 455 litres it’s 10 litres bigger than the BMW’s, while the neat ski hatch and split-fold function add extra versatility.

With a smooth automatic gearbox, you really could do decent distances in this car and not feel tired, too.

Despite Audi’s upmarket image and tradition for engineering excellence, the A5 finished in a lowly 71st place in our Driver Power 2014 survey, with owners criticising the car’s poor reliability. However, it scored a top 20 result for build quality, and the RS5 also uses bespoke parts developed by Audi’s high-performance division, quattro GmbH.

Standard safety kit includes the usual complement of six airbags and electronic safety systems, plus the added benefit of four-wheel drive and upgraded brakes. If you’ve got deep pockets you can spend an eye-watering £5,250 on powerful carbon ceramic brakes, £900 on adaptive cruise control and £440 and £370 respectively on blind spot monitoring and lane keep assist.