Potent new Audi RS 5 coupe has been downsized to a V6, but is it still fun to drive?

The new Audi RS5 is incredibly fast for a big two-door coupe. Its new turbocharged V6 doesn’t make or break the car’s character, but many potential buyers will be left wanting by the inert and predictable handling. Others might find solace in the RS5’s refinement, effortless pace and luxurious interior. Just be sure you know what you want before signing on the dotted line.

Downsized turbo engines are here to stay and the new Audi RS 5 is the latest car to abandon its free-revving 4.2-litre V8 in favour of a 2.9-litre twin-turbo V6. We drive it in the UK for the first time.

It’s not as if the switch to turbocharging has dented the coupe’s performance credentials; Audi claims the RS 5 takes only 3.9 seconds to cover 0-62mph. But a car like this requires character and a charm that justifies its hefty £62,900 price tag.

On its own, the RS 5’s ability to cover ground simply, swiftly and without deliberation makes it a hugely appealing road car. But alongside rivals such as Mercedes-AMG’s boisterous C 63 Coupe and BMW’s lairy but unpredictable M4, the Audi could come across as less inspiring. 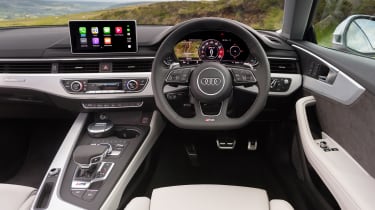 Start it up and it sounds muted. The low-down torque means there’s no benefit in letting the engine scream to its red line, and even when you do it shows there’s only limited vocal range. It’s certainly no match for the Mercedes-AMG’s 4.0-litre V8.

Our car’s Dynamic Ride Control system threw up some questions, too. Many of these set-ups don’t offer enough contrast when switching between modes, but the Audi’s Dynamic setting is simply too stiff.

That said, the RS 5 rides incredibly well in Comfort mode, but dialling it up a notch makes the coupe too firm for UK roads. If you avoid the most aggressive setting, the Audi is easily one of the fastest and most comfortable road cars on sale, with a very different character to its rivals.

There’s loads of grip and plenty of traction, allowing you to fire the Audi out of tight bends, but the new RS 5 always feels safe and well behaved. Granted, not everyone wants a sports coupé with a wild side, but for many, the ability to deliver truly engaging handling when you pull off the motorway is an important factor.

It’s also not that economical. Audi says it will do 32.5mpg (vs the old V8’s 26.9mpg), but a heavy right foot will see that dip dramatically. The lower CO2 has no benefit for private buyers, either, because the high list price levies an annual flat rate of £450.

There’s no faulting the cabin, though. Everything feels crafted with an absolute attention to detail, and quality is second to none. But just as you feel from behind the wheel, there’s little to mark it out as an RS. 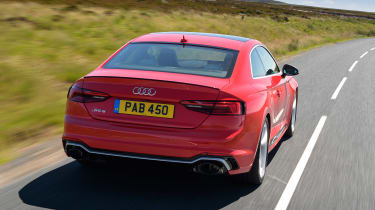 Click on the gallery above to see more of the new Audi RS 5...