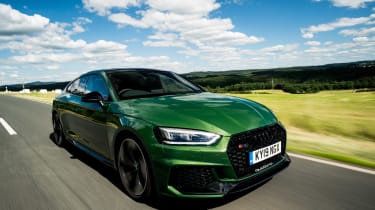 As a tool for crossing continents, little is as effective as the Audi RS 5 Sportback. Huge performance, endless grip and impressive refinement are all there in abundance, as is a roomy cabin and a big boot. But compared with its rivals it feels like something of a blunt instrument from behind the wheel, and one that’s lacking character. An Alfa Romeo Giulia Quadrifoglio is more exciting, while the V8-powered Mercedes-AMG C 63 has a greater sense of occasion. If you’re searching for a fast-all rounder that’s easy to live with, however, it’s tough to overlook.

It’s been a long time coming, but we’re now able to get our hands on the Audi RS 5 Sportback. While the Coupe went on sale back in mid-2017, the five door alternative didn’t quite make it here before WLTP-enforced emissions certification came into play.

But here it is, lining up against rivals like the Alfa Romeo Giulia Quadrifoglio, the Mercedes-AMG C 63 S, and the soon-to-be-replaced BMW M3. There are just 250 Sportbacks (plus 250 Coupes) available to order in the UK this year before an updated version, following the rest of the revised A4 and A5 ranges, comes later in 2020. But with such a talented trio of rivals to choose from, why pick the Audi?

Under the skin, the basics are the same as the RS 5 Coupe. That means power comes from a 2.9-litre twin-turbocharged V6 pumping out 444bhp and 600Nm of torque. All of the UK’s allocation come in Audi Sport Edition trim which, on top of some black exterior pieces and a top speed limiter bump to 174mph, gives the RS 5 a throaty-sounding sports exhaust.

But what makes the RS 5 unique against its rivals, at least until the next M3 is released, is its four wheel drive system. In most situations, the quattro system sends 40 per cent of its torque to the front axle and 60 per cent to the rear. As a result, none of its rivals come close for traction. 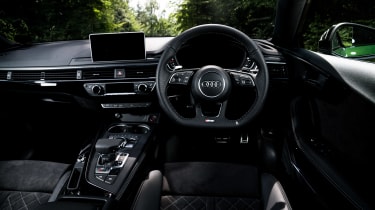 Despite giving up 59bhp to the Alfa, the Audi will do 0-62mph in an identical 3.9 seconds. Yet in the real world the difference is even more stark. Where exiting a corner in the Alfa or Merc takes a gentle, considered squeeze of the throttle to avoid panicked flickering from the traction control light, the RS 5 can fire out of the same turns at a frankly violent rate. Combined with the huge levels of grip delivered by the 20-inch wheels wrapped 275-section tyres, it means that the RS 5 can cover ground at an astonishing rate without breaking a sweat. While the roads of our German test route were smooth, any mid corner bumps were shrugged off with impressive composure, while the brakes feel strong and positive.

The sports exhaust is a welcome introduction, too; while the RS 5 still can’t quite deliver the thunderous roar of the C 63’s V8, one press of the exhaust button on the centre console turns the RS 5 into a car that’s significantly noisier and more tuneful than earlier versions.

While it’s impossible to knock its speed, its harder to make a case for the RS 5’s fun factor. There’s little in the way of adjustability in the chassis, and despite the Quatrro system’s ability to send up to 85 percent of drive to the rear wheels, the system rarely feels anything other than neutral. 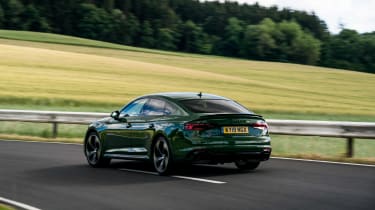 The steering, though precise enough, offers little feedback to the road, either. Quick though it is, the RS 5 sometimes seems a little too easy to drive; it’s a car which manages to flatter a decent driver rather than reward a good one.

But by being able to isolate some of the information between road and driver, means that the RS 5 Sportback is a phenomenal long-distance cruiser. Bumps are rounded off much more subtly than in either the M3 or the C 63, and – a little road noise aside – the cabin remains hushed at speed. It’s not unreasonable to expect low to mid thirties (mpg) on a motorway cruise too, so it delivers a decent range between fill-ups.

The interior itself is as smartly appointed as ever, and build quality is almost impossible to fault. The infotainment system is getting on a bit now though; there’s no touchscreen, which makes apps like Android Auto and Apple CarPlay a faff to use. At least it’s backed up by Audi’s digital cockpit, which is still one of the prettiest, most intuitive and most customisable digital dial set-ups on the market. 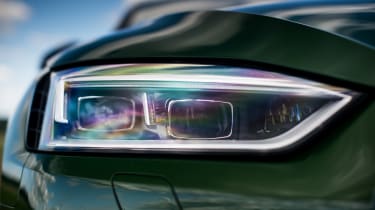 If you do need to carry four then the Sportback makes more sense than the coupe, too. An extra 60mm between the front and rear axles translates into generous rear legroom, which combined with the half-Alcantara/half-leather upholstery makes it a very comfy place to sit.

The huge hatchback opening at the back makes the Sportback’s boot more usable than the Coupe, and arguably the A4 saloon, as well, despite its 465-litre volume measuring 15 litres less than the four-door’s.

Prices for the RS 5 Sportback are identical to the Coupe, with each starting from £68,985. That makes the Audi the best part of £5,000 more expensive than the Alfa Romeo Giulia Quadrifoglio and almost £10k more than the ageing BMW M3 – yet it is less than the £73,258 that Mercedes-AMG asks for the C 63 S.