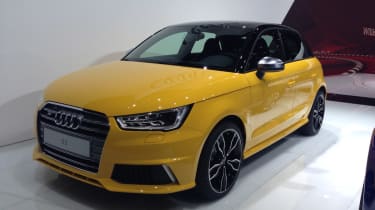 It's been revealed in the metal at the Geneva Motor Show, and goes on sale in the spring.

The S1 has a 2.0-litre turbo engine delivering 228bhp and 370Nm of torque. It gets a six-speed manual gearbox and quattro four-wheel-drive as standard, and the three-door S1 covers 0-62mph in 5.8 seconds, with the five-door Sportback taking 5.9 seconds.

Performance changes over the regular A1 extend to the suspension as well, with a new four-link set-up at the rear and firmer dampers all-round to help improve cornering. Alloy wheels go up to 18 inches, while there are larger brake discs and new settings for the electromechanical power-steering, too. Standard Audi Drive Select lets owners vary the dampers and engine response.

Marking the S1 out is a choice of four exclusive new paint finishes, including the Vegas Yellow on the Sportback in our pictures. There’s also an aggressive new bodykit, while buyers have the choice of fitting a quattro exterior styling package, too. This also features on the car in our pictures, and adds even more striking bumpers and a rear spoiler.

The shape of the headlights is now a bit sharper – something that will be rolled out across the entire A1 range as part of a facelift later this year – plus the S1 gets xenons. And at the back there are new LED tail-lamps with unique graphics.

The interior is finished largely in black, with dark grey dials in the instrument panel, although a quattro interior styling package adds splashes of colour to match the paint. Sports seats are standard, while racier versions complete with integrated headrests are optional.

UK prices haven’t been confirmed yet, but are expected to start from £24,900 for the three-door S1, with the Sportback costing £730 more.