The new Audi S8 is one of the brand's performance flagships, but has it sacrificed outright speed and handling for comfort? 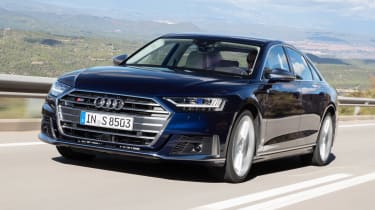 Audi's recent S models have offered a surprising degree of driver interaction. The new S8 doesn’t deliver that, but with bags of cutting-edge technology it’s still more capable than its 2.2-tonne kerbweight would suggest. The predictive active suspension has the potential for old-school Citroen-like ride quality, too.

Along with the R8 supercar, the Audi S8 could be considered one of Audi’s performance flagships. In its latest generation, in fact, Audi has thrown every bit of technology it can think of at the A8, to ensure it’s an accomplished performance car as well as a luxurious limo.

It’s difficult to know where to start when describing the S8, though the fitment of the brand’s 4.0-litre, twin-turbocharged V8 petrol engine means the S8’s performance credentials are in no doubt. It’s much like the engine we’ve seen in the latest RS 7, and in this application develops 563bhp and 800Nm, transmitted to the road through Audi’s quattro all-wheel drive system.

The result is acceleration that wouldn’t have looked out of place in a supercar a few decades ago. Despite weighing in at 2,230kg, the S8 sprints to 62mph in 3.9 seconds, and runs into an electronically limited top speed of 155mph. A smooth-shifting eight-speed automatic handles gear changes, while Audi’s 48-volt mild-hybrid system reduces load on the drivetrain for small efficiency improvements. The all-wheel drive system can distribute torque where it’s required – up to 70 per cent to the front axle, or 85 per cent to the rear.

The suspension can also tilt the car into corners, by up to three degrees in Comfort+ mode. It can raise the car by 50mm to make stepping in or out a little easier, too. Of course, the S8 also packs other features we’ve seen elsewhere in Audi’s range, including all-wheel steering, and cylinder-on-demand technology to reduce fuel consumption at a cruise.

Visually, Audi has kept things subtle; the S8 gets the usual silver detailing on the grille, lower body trim and door mirror caps, discreet badging and four tailpipes, plus a unique alloy wheel design. It’s all very restrained inside too, with diamond-stitched sports seats and a flash of carbon fibre. A little dour perhaps, but logically arranged and very comfortable – finding a good driving position is a cinch. 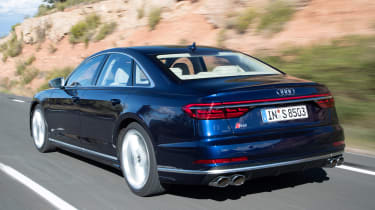 As an A8 at heart, there’s as much space in the rear as there is in the front, though the very longest of leg might want to sit behind the front passenger seat and nudge it further forward for even greater room.

Starting off in Comfort+ mode, the predictive active suspension is quite remarkable. It’s not infallible – the camera needs a good view of the road in front, so if you’re following close to another car it won’t spot bumps in time – but allow it to do its work and the S8 floats like an old Citroen.

The corner tilting function is effective, too. It works best at gentle speeds, tipping the car in the direction you’re turning, and reducing the cornering force on passengers – though some may find this sensation a little odd, given most of us are used to cars rolling away from the direction of travel. 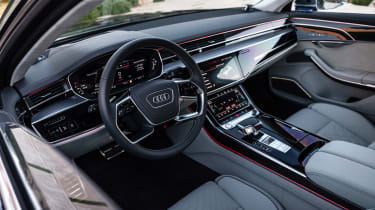 Generally though, the S8 meets the comfort brief, and keeps all the usual A8 qualities – like very low levels of wind noise, minimal tyre noise, and a whisper-quiet engine – in tact. At least until you can resist no longer and begin to explore more of the V8’s capabilities.

It’s always remarkable how quickly performance limos like the S8 can move, and if you switch to Dynamic mode, you need very little pedal pressure for the S8 to hitch up its skirt and lunge for the horizon. The soundtrack remains subtle by V8 standards, but the background growl is still appealing.

The corners are where the S8’s other technologies shine. If the V8 shrinks straights, then it’s Audi’s four-wheel steering that makes bends a breeze. The S8 is remarkably agile, and while you don’t get much feedback at your fingertips, you won’t find any understeer unless you’re really pushing your luck.

It’s all very impressive, but with feedback and noise kept to a minimum, the S8 is still a luxury car at heart, rather than a sports car. Treat it as a very brisk A8, rather than a luxurious sport saloon, and you shouldn’t be too disappointed.