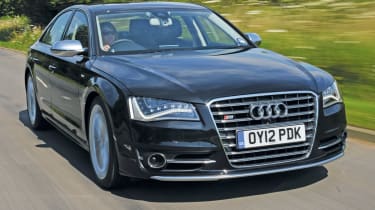 There isn’t huge demand for souped-up limousines, but if you’re in the market for one, the S8 should be on your shortlist. The new V8 engine delivers epic performance, while the four-wheel-drive chassis adds agile handling. Better still, at the touch of a button this Audi turns into a luxuriously appointed and refined executive express.

There's an all-new Audi S8, and it's faster and cleaner than ever before. The car is based on the company’s luxurious, range-topping A8 limousine, and uses an even more powerful version of the new twin-turbo V8 found in the S6.

Better still, the combination of the seamless eight-speed automatic transmission and quattro four-wheel drive means that accessing all this brutal performance is child’s play.

The S8 features the same cylinder deactivation system as the S6, so it’s 12 per cent more economical than the 5.2-litre V10-powered model it replaces.

Yet despite the supercar-baiting acceleration, the S8 still does a fine job of being a luxury express. Interior quality is second to none and there are plenty of gadgets and gizmos – including the Active Noise Cancellation system, which delivers near-silent motorway cruising. The soft leather sports seats hold you firmly in place and the air-suspension soaks up the bumps.

Drivers can also use Audi Drive Select to sharpen the car’s responses for greater agility and poise through corners. It’s hardly a sports car, but there’s plenty of fun to be had from hustling this huge limo down a twisty back road.

Like the S6, the S8 doesn’t shout about its performance potential – the biggest clues are the LED headlamps, oval exhausts and 20-inch alloys.

Factor in a lower price tag than for the Jaguar XJ Supersport and Mercedes S63 AMG, and it’s hard not to be won over by the Audi.