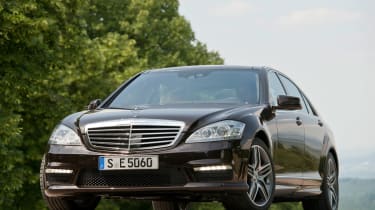 The S63 AMG is proof that even the most dedicated performance brands can’t escape the need to clean up their acts. And while dropping a V8 engine to ‘only’ 5.5 litres may appear to be a small concession, the hi-tech direct-injection system and slick box indicate what a difference relatively small changes can have on emissions. But whether many owners will drive economically when the performance is so intoxicating is another matter.

These days, mpg is the new mph. And that’s not something even Mercedes’ performance division can ignore. So although this car looks like any other AMG-tuned S-Class, the powertrain that propels it from 0-62mph in only 4.4 seconds is far from normal.

Under the bonnet of the latest S63 AMG is an all-new 5.5-litre twin-turbo V8. It replaces the naturally aspirated 6.3-litre that’s been used in AMG models since 2005, and develops a huge 537bhp and 800Nm of torque. Buyers will also have the option of the AMG Performance Pack, which lifts power to 563bhp and torque to an even more incredible 900Nm. Top speed rises from 155mph to 186mph in turn.

But alongside the headline performance figures, the engine consumes 25 per cent less fuel than the outgoing unit. That means it returns 26.9mpg – an improvement of 7.4mpg – while cutting CO2 emissions by 101g/km to 246g/km.

It has been produced as part of AMG’s Performance 2015 strategy, which intends to reduce emissions but not at the expense of power. As a result, this is the first AMG powerplant to feature direct injection and a stop-start system. The unit is hooked up to a slick seven-speed automatic transmission that’s shared with the SL63 and E63 AMG. This gearbox changes up early, reducing revs and saving fuel, too. But while the statistics are interesting, enthusiasts will be pleased to know that the engine still makes all the right noises.

We drove the Performance Pack version, and with such a huge amount of torque, you’re shoved into the back of your seat every time you accelerate. And while the V8 is the star of the show, the S-Class remains one of the best cars at belying its size. The steering is light but direct and the ride is superb, as you’d expect with a big cruiser.

There have been some slight tweaks to the suspension, yet the new engine weighs nearly the same as the previous unit, meaning that most of the changes involve adapting the stability and traction control to cope with the torque.

The icing on the cake is the excellent automatic box. It changes up and down smoothly whether in auto or sport modes, or can be switched to manual operation, with drivers using the steering wheel-mounted paddleshifters.