The upgraded Audi S8 Plus limo gets an 85bhp boost, but does it make sense in the UK? 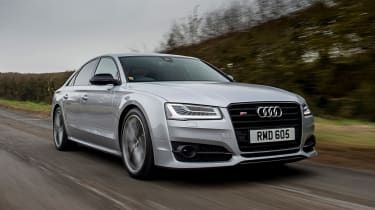 When we tested the Audi S8 Plus on derestricted German autobahns, we were astounded by its grip, poise and straight-line pace. Back in the UK it remains brutally fast, but it misses the mark as to what a sports limousine should be – fundamentally lacking a sporting sense. It’s remarkably refined, yet more modern rivals offer a more accomplished package.

When your £82,075, 513bhp S8 isn’t quite enough, thankfully Audi has you covered. This is the £98,395 Audi S8 Plus, an even quicker, more powerful and pricier version of the already rapid saloon.

We first drove the luxury limousine on German autobahns last year, where unleashing the full might of the 597bhp twin-turbo V8 engine was simple and straightforward. A case of point and shoot, if you like. But back in the UK, where the roads have disruptive bumps and potholes to contend with – not to mention speed limits – it’s an altogether different challenge for the big, fast Audi. 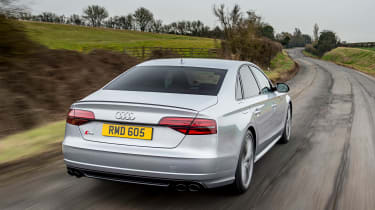 From the off, the sort of performance the S8 Plus is capable of isn’t immediately clear. Around town the car wafts with composure and poise, effortlessly ferrying you around.

It’s the same story at motorway speeds, whereby clever sound-cancellation and cylinder-deactivation tech ensure the cabin is remarkably quiet. But plant your right foot and there’s an immediate character transformation. The Audi is frightfully fast in a straight line, launching itself up the road with astounding pace. There’s also a huge amount of grip through the quattro four-wheel-drive system.

Unfortunately, that brutish muscle car charm is soon eroded on a twisting country road. At nearly two tonnes the S8 Plus is a heavy machine, and a potent V8 can only go so far to hide that. Turn-in is sharp, but you’re never fully aware how much lock is needed through quick bends as the steering doesn’t offer a huge amount of feel. Fast? Yes. Fun? Not so much. 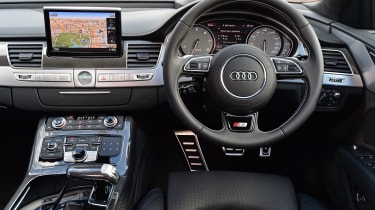 Ease off and the S8’s limo-like capabilities come into their own. It’s an exemplary cruiser, yet as a sporting saloon the Audi will leave you wanting. It excelled on Germany’s arrow-straight, derestricted autobahns, but here in the UK its flaws are highlighted.

The cabin, while suitably luxurious, lacks the cutting-edge tech of a Mercedes S-Class or BMW 7 Series. There’s a new A8 due next year, though, and it’s likely to up the model’s game in terms of connectivity and design.

At nearly £100,000, the Plus is £16,320 more than a standard S8. For that, you get Matrix LED headlights, a Bose stereo and double-glazed rear windows – but it’s still a hefty premium on an already pricey car.