A few surprise names in the mid-table results, which shows the dealers that still have room to improve 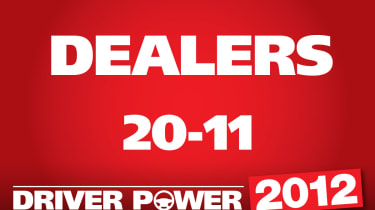 You don’t expect to find prestige brands in the bottom third of our dealer chart, but that’s where Land Rover’s network is. It’s fallen one place to 20th, although that’s an improvement on 2011, when it fell five positions. To get back to mid-table, Land Rover garages should rethink their prices – you tell us only Porsche and Audi provide worse value. Keeping owners up-to-date with the progress and cost of work being carried out is the network’s next biggest shortcoming.

Well done, Peugeot. After years languishing in the Driver Power doldrums, the lion is finally going from strength to strength. This year, its dealers built on 2011’s impressive three-place rise to jump up another six positions – only the Audi and Suzuki networks have climbed further in 2012. The biggest improvements have been in staff attitude and the standard of work. Great news, particularly if the new 208 supermini is on your shopping list now.

An 18th-place finish for a premium brand like Audi doesn’t look very impressive – but you only have to see where the dealer network finished last year to realise this represents a stellar performance in 2012’s Driver Power survey. An eight-place jump repairs the damage of its eight-place drop in 2011 and is enough to make it the most improved brand in our chart. But Audi finished rock-bottom for value. If it fixes this, who knows where it could end up next year?

If only the dealers could match the talent of Kia’s model line-up. From an impressive top 10 finish in 2011, the brand has slipped eight places. Things have gone wrong everywhere, but most worrying is 19th place for helpfulness and attitude. This compares to seventh in 2011. And you can’t ignore value for money, either. Last year, Kia rated second overall for this; now it ranks seventh. So while the quality of Kia cars is increasing, so is the cost of maintaining them.

Mid-table finish will be welcomed by BMW bosses, as it signals the end of a slide that saw the brand’s dealers drop from 12th in 2009 to 18th last year. Sparkling premises have always been a draw, but improvements in staff attitude and the standard of work have both played a part in driving BMW back up our table. Dealers need to keep their foot on the pedal, though, as rival Audi is snapping at their heels just two places further down.

MINI dealers are beginning to show the kind of form that propelled the network to 11th overall in our 2010 dealer survey – they’ve even leapfrogged parent company BMW. The network’s friendly and helpful staff could really show their BMW counterparts a thing or two. They’re responsible for the strongest part of the whole dealer experience, ranking 11th out of 30 for helpfulness and attitude – seven places higher than BMW’s staff. The big weakness is value.

Consistency is the key to Volvo’s success. Yes, the brand dropped a place this year, but 14th is still a decent result and the only area where it ranks lower than 15th out of 30 is value for money. Its 20th-place finish here is an improvement on last year, when it ranked 25th. Cleanliness and atmosphere of premises has dropped from eighth last year to 13th this time around. Improve that and Volvo would have a good chance of regaining that lost position.

Thirteen is a lucky number for Suzuki, as it marks the brand’s rise to the top half of the table. The seven-place jump makes it the second-biggest climber in our survey: music to the ears of dealers. They clearly listened to our feedback last year, when the biggest complaint was about discourteous staff. This year has brought about a transformation: its dealers ranked 10th out of 30 for helpfulness and attitude. Value for money has also improved.

Hyundai has slipped out of the top 10 this year, dropping four places. The reasons for this decline are wide-ranging, as the brand saw five-place falls in rankings for the standard of work, as well as helpfulness and attitude of staff, plus its overall rating. A further four-place drop for technical knowledge sealed its fate. The good news for potential buyers and current owners is that 12th is still a solid finish and there’s nothing to put you off buying a Hyundai.

When Saab closed its doors for the final time last year, it wasn’t down to a lack of effort from its UK dealers. Their second 11th-place finish in a row is an impressive achievement under the circumstances. The attitude of staff, their technical expertise and the standard of work all deserve praise. Only high costs let the side down, but this result bodes well for motorists who take their cars to any garages that used to be part of the Saab UK dealer network.