These best breakdown companies in the business, as voted for by 29,000 readers 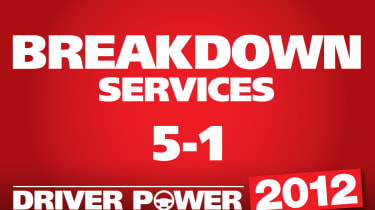 Overall rating: 83.55%Time to arrive: 68.4% arrived within the hourResult of call-out: 33.3% temporarily fixed at the roadside

It’s been a phenomenal year for Aviva. The company is 2012’s biggest climber, rising six places into the top five. You told us it’s raised its game in every area, but you were most impressed with its ability to sort out the faults that had left you broken down – ranking it first in this category. If Aviva can speed up recovery times and offer a little more value for money, it could be challenging for a podium position next year.

Overall rating: 83.83%Time to arrive: 55.2% arrived within the hourResult of call-out: 40.0% permanently fixed at the roadside

After steadily gaining ground to rivals in recent years, the RAC has climbed two places to break into the top five. It’s not surprising that a brand this big would be keen to present itself well, but you clearly appreciate the effort its staff make. You were also impressed with their friendliness and ability to get problems fixed, plus the service overall. The RAC isn’t the fastest to a breakdown, though, and scored its lowest mark in the value category – where it’s been criticised in Driver Power before.

Another solid performance has ensured a podium finish for Britannia Rescue. That’s one place down on last year, but it still came in the top five in every judging category. Staff are rated for their friendliness and helpfulness, and Britannia was voted second best for speed of recovery and overall service. The only areas holding the company back were value and its ability to get problems fixed – although it came fifth in both areas, so customers clearly still think it’s offering a first-class service.

It’s held the top spot for years, but GEM Motoring Assist has to make do with the silver medal this year. You ranked it first for speed of recovery and overall service, plus were impressed by staff’s friendliness and helpfulness, and general presentation. But rivals have been piling on the pressure, and GEM slipped from second to fourth in the critical value category. A number of competitors were also ranked higher on their ability to fix faults.

The gold medal goes to AutoAid. After consistently topping the value chart in our last few Driver Power surveys, the brand has raised its game in other areas in 2012 – it scored with its ability to fix your problems, friendliness and helpfulness, speed and overall service. AutoAid has an innovative approach to breakdown cover: you pay for the cost of recovery if you need it, and the company reimburses you. This allows it to offer cheap prices without compromising service – something you clearly value.