The facelifted BMW 5 Series gets a new six-cylinder plug-in hybrid 545e option, and we’ve been for a short spin to get a feel for the new drivetrain 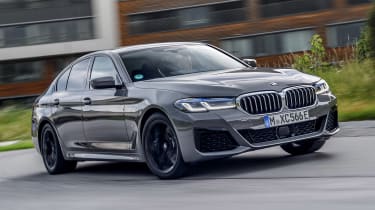 BMW has launched a new and more powerful plug-in hybrid version of the 5 Series, badged the 545e xDrive. Prices will start from £54,945 when it goes on sale in the UK later this year.

The BMW 545e xDrive shares the same plug-in hybrid powertrain as the recently launched X5 xDrive45e SUV. It comprises a turbocharged 3.0-litre straight-six petrol engine, an 11.2kWh battery pack and an electric motor  for a maximum output of 387bhp and 600Nm of torque.

BMW’s most powerful PHEV powertrain gives the 5 Series a 0–62mph time of 4.7 seconds, a top speed of 155mph and, more importantly, a maximum electric range of 33 miles. However, fuel economy and emissions figures are slightly poorer than the 530e; the 530e xDrive has claimed fuel economy figures of between 128.4–176.5mpg, while the 545e xDrive returns between 117.7–166.1mpg.

CO2 emissions figures follow the same pattern – the 530e emits between 35–50g/km, compared to the 545e’s figures of between 38–54g/km of CO2, which could be enough to swing the decision for company car buyers. 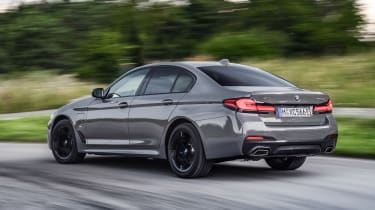 As the 545e is based on the facelifted 5 Series, it receives all the cosmetic and technology tweaks fitted to the updated standard model; buyers get a slightly tweaked radiator grille, slimmer LED headlamps and updated front and rear bumpers. Inside, BMW has finally added support for Android Auto to its excellent 12.3-inch infotainment system.

The 545e xDrive forms a key part of BMW’s latest electrification strategy, which is focussed on expanding its pure-electric, plug-in hybrid and mild-hybrid models. BMW expects half of its European sales will be electrified by 2023 – although the German brand has confirmed that it will continue to improve and develop its combustion-engined models alongside its electrified offerings. BMW is aware that not all of its customers are ready to make the switch to an electric powertrain just yet.

BMW sees PHEVs as a happy medium between the convenience of petrol power and fully electric. BMW has attempted to make the new 545e act like an EV in the city by installing new geo-fencing technology, which automatically forces the drivetrain to run in pure-electric mode when the car recognises it’s in a built-up area. 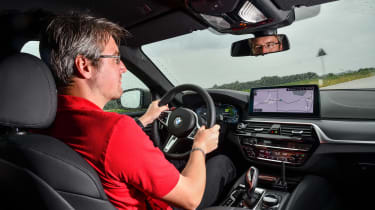 While many carmakers are pursuing standalone all-electric cars and a sub-branding approach, BMW has decided to go for a different strategy  – offer its core line-up with total powertrain flexibility, with petrol, diesel, plug-in hybrid and fully-electric versions of its core next-generation cars planned.

An electric version of the next 5 Series has been confirmed, but the closest thing you’ll get to that with the newly facelifted seventh-generation model is this: the new 545e plug-in hybrid, which we’ve driven in prototype form.

We found that with the new engine, suddenly the plug-in 5 Series is a far sportier proposition than it once was, while the new intelligent drive modes are capable of identifying city centre low emission zones.

As for fuel economy, the official figures take a slight dip over the 530e, but the trip computer still showed 150mpg on our short 12-mile stint at the wheel.

What does the new BMW 545e xDrive have to beat? Check out our list of the best PHEVs on sale now…