The new plug-in hybrid BMW X5 xDrive45e offers over 50 miles on electric power and over 200mpg, but does it deliver? 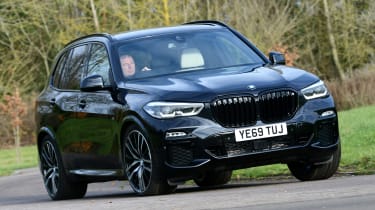 It’s hard to criticise a car that can deliver genuinely low running costs, lightning fast performance, and enough space for five people to travel in genuine comfort. But, in theory, that’s precisely what the new plug-in hybrid X5 offers. So while it’s expensive, the X5 xDrive45e is a deeply impressive car, even if its true electric range isn’t perhaps as good as BMW suggests.

Nowadays it’s all about range, and the tax benefits that go hand-in-hand with the ability to run on pure electric power. Because if your electric car, or, in this instance, your plug-in hybrid electric car, can do more than 40 WLTP-rated miles in EV mode, then your Benefit in Kind company car tax burden is almost halved.

It’s for this reason that BMW has beefed up its new X5 hybrid – to a point where it claims the car can now run for over 50 miles on electric power alone. At the same time, though, the X5 has switched its wheezy four-cylinder engine for a 3.0-litre turbocharged straight-six, which sits alongside the 111bhp electric motor for a combined 389bhp and a thumping 600Nm of torque.

So, while the claimed economy and emissions are now 201.8mpg and just 31g/km, the new hybrid X5’s outright performance has rocketed. Think zero to 62mph in just 5.6 seconds – and 146mph flat out. Not exactly poor for a vehicle that can return a theoretical 200mpg. 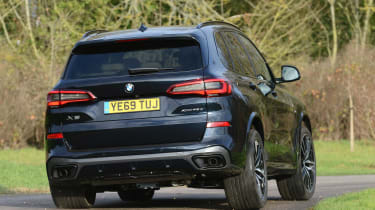 Those numbers mean that for the 2020/21 tax year, the new X5 xDrive45e will sit in the lowly eight per cent BiK band. A Volvo XC90 T8 Twin Engine, for comparison, will do less than 30 miles on electricity, and therefore posts a far higher 14 per cent BiK rating – despite its relatively low-capacity four-cylinder petrol engine. A diesel X5 xDrive30d sits in the very top 37 per cent bracket.

If it all sounds a bit space age, fear not; in reality the new plug-in X5 feels much like the regular SUV on the move. There are various drive modes you can select via a new switch next to the gear lever, ranging from full EV to Hybrid or Sport.

We remain sceptical about BMW’s claim of a 54-mile EV range; our test car managed just 25 miles when we drove it. But in Sport mode there was little doubt about how rapid it appeared, or how natural it felt to drive; the combined efforts of the petrol straight-six and the electric motor sending it towards the horizon with serious intent for a vehicle that weighs the very thick end of 2.5 tonnes without passengers on board.

Inside, the X5 xDrive45e feels luxurious and spacious, even though it’s only available in five-seat configuration. Its boot is compromised ever-so-slightly by the electric gubbins, but only by a few litres. Don’t’ worry, there’s still plenty of room for the shopping.

It’s also extremely well equipped, as it should be for the money. All cars get climate control, Apple CarPlay, a big touchscreen in the centre of the dash, plus the regular iDrive controller down in the centre console. Next to which are the various buttons that allow you to switch between the drive modes. 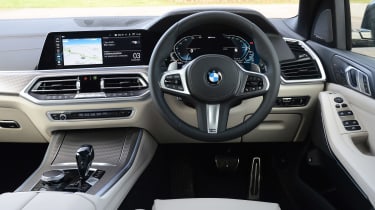 Once you’ve had a play with those drives modes, however, you inevitably tend to leave the X5 in Hybrid and let the car work out what’s what, and what the best mode is for the conditions. And that’s when the hybrid X5 makes most sense; switching between petrol and EV seamlessly, depending on what you do with the throttle, the brakes and the steering.

So overall it’s become an impressive car, having previously dropped off the pace relative to its competition. Despite the extra weight it carries courtesy of its much improved electric powertrain, it drives much like a regular X5. And yet the benefits from its increased hybridisation are not to be underestimated when it comes to both its on-road performance and its taxation as a company car.

BMW has a done a top job on this one, putting the X5 right up there beside or even above its rivals from Volvo and Porsche et al.