All-new BMW X5 is aiming for the top of the sporty SUV class, alongside Porsche Cayenne and Range Rover Sport 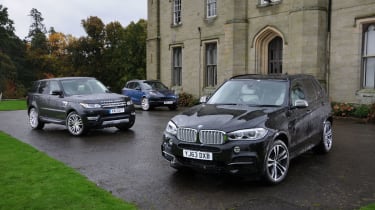 The BMW X5 has been a strong-selling mainstay of the premium SUV class ever since the original made its debut in 1999. But the all-new Range Rover Sport and second-generation Porsche Cayenne knocked the MkII X5 from its place at the top of the class – so can the new third-generation X5 take BMW back to winning ways?

It promises to be roomier, more refined and better to drive, while the cabin features new levels of technology and luxury. Across the board, the newcomer is cleaner and more economical, there’s a choice of three diesels and one petrol engine, plus for the first time there’s the option of a two-wheel-drive X5 – the sDrive 25d.

But with the first cars arriving in dealers this month, the new X5 will initially be offered only in four-wheel-drive 30d and M50d diesel trim, plus the 50i petrol. So we’ve put the range-topping M50d to the test against the Range Rover Sport SDV6 and Cayenne Diesel S to find out if the BMW is back at the top.

In recent years, big SUVs have stolen sales away from full-size people carriers. Fitting third-row seats in the Range Rover costs £1,500, but access is tricky and space tight. There’s no seven-seat option with the Porsche, while a third row of seats on the X5 will cost £990. BMW estimates around 40 per cent of cars will have seven seats, but opting for these means sacrificing the self-levelling rear air-suspension.

With the best body control, the strongest grip and the most engaging steering, the Porsche is the best-handling car of our trio. It’s also the fastest and, despite its big V8 engine, weighs just 5kg more than the X5.

Few owners use these cars for serious off-roading, but their rugged, go-anywhere abilities are a big part of their appeal. All three feature hill descent control, while Land Rover’s Terrain Response system means the Range Rover Sport is capable in the rough. With the £2,379 air-suspension, the Porsche gets adjustable ride height, while £777 buys underbody protection. All three will benefit from being matched to winter tyres, as our winter tyres 4x4 grip test video proved. 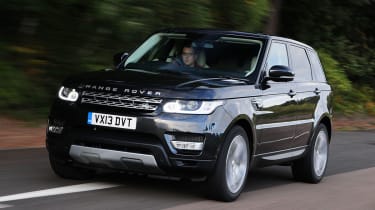 The Range Rover Sport takes another victory, thanks to its breadth of abilities. It can’t match the performance of the Cayenne S Diesel, but its mix of comfort, class, off-road ability and luxury is hard to argue with. It’s every bit as desirable as the bigger Range Rover, and a fine all-rounder. However the new Sport is cleaner than the V8 Porsche, but even with stop-start, it can’t match the X5’s 177g/km CO2 emissions. 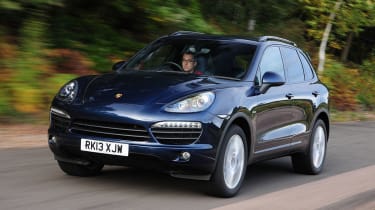 The Porsche Cayenne finishes second by the narrowest margin. It’s fast, classy, comfortable and great to drive, and boasts a brilliant engine. But it’s held back by high CO2 emissions, plus you have to spend nearly £10,000 on options to match the Range Rover’s equipment count. The Porsche diesel has more torque than both its rivals: its 850Nm output is 100Nm more than a Cayenne Turbo S. 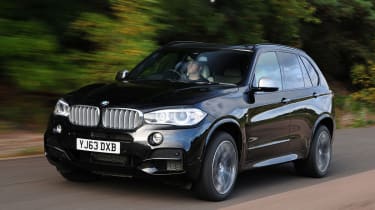 With impressively low emissions and a more upmarket cabin, the new X5 has taken a step forward. Yet in spite of a gem of an engine, the driving experience disappoints. An unsettled ride and complicated dynamic options make it more uncomfortable than the Range Rover and less agile than the Porsche. In spite of the introduction of the four-cylinder 25d models, the six-cylinder 30d is expected to account for 50 per cent of sales. Across the range, M Sport trim will make up 80 per cent of registrations.