As we get an exclusive ride in the Byton Concept electric SUV at CES, Tesla could have a real fight on its hands

From our very short first experience of a Byton model on the track and having experienced some of the tech first hand, the brand is showing lots of promise. It has the premium feel the market needs, some real world-first tech and that brilliant 125cm wide screen – we’re not surprised there was a queue of people wanting to buy one at CES, and plenty of interest in investing in this start-up. Let's hope Byton decides right-hand drive is on the agenda sooner rather than later because we think they could have a British hit on their hands.

Auto Express was invited ‘backstage’ by Byton at CES and onto a specially designed track to experience the new Concept SUV from the passenger seat – and first impressions were that Byton hasn’t just thrown down the gauntlet to the likes of Tesla, they’ve taken it and slapped their rivals around the face.

From the comfort of our nicely-trimmed leather chair, which was electrically swivelled inwards by 12 degrees for a chat with the driver, we were shown how the gesture control worked, using a finger to move a small circular cursor around on the screen before snapping fingers together to execute a command – it’s the most intuitive and accurate gesture control system we’ve yet seen.

The Shared Experience Display seems surprisingly intuitive for something so large, but the quality of the screen and graphics was impressive and it was good to be able to see all the driver’s information from the passenger seat, as well as having the opportunity to fine tune the infotainment. Our driver was fiddling with the tablet-style touchscreen in front of the steering wheel to control some of the more direct functions, while voice control featuring Amazon Alexa could also be used to control the main display.

A panoramic glass roof added to the feeling of quality inside, with a combination of wood, leather and metal making sure the Byton will compete with premium rivals. The electric platform means a flat floor and plenty of space for those in the back, and enabling the front seats to swivel – again controlled via the driver’s touchscreen. 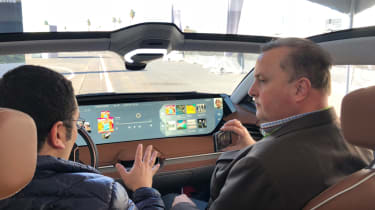 Then it was time to hit the track, with the trademark instant EV acceleration combining with the whine of the motor as we were pushed back into our seat. Although Byton has only given us power figures so far and no performance data, it didn’t feel Tesla P100D fast (little does), but was certainly swift enough to  make you smile as we accelerated down the short straight.

The batteries and low centre of gravity meant there was no sign of body roll around the short, twisty track, while there were no complaints about ride comfort either.