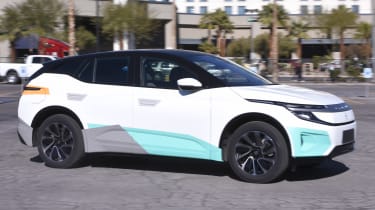 All the digital interaction in the world cannot make a good car, but while, on the basis of this short squirt, the Byton M-Byte is not likely to challenge a Tesla or a Jaguar I-Pace for driving involvement, it is on track to deliver ample performance, comfort and refinement. That will allow, one presumes, the car’s occupants to focus less on the journey and more on basking in the reflective glow of what still promises to be a revolutionary approach to the interior experience. Let’s just say that while we were curious about Byton before; we’re now fascinated and excited.

Amid the tidal wave of new electric cars that’s coming over the next two years, Byton stands out as offering something different. This international mash-up of global investment, Chinese manufacturing, and European engineering and management has grabbed headlines ever since its first concept, an SUV called M-Byte, was revealed back at the Consumer Electronics Show (CES) back 2018.

The company’s plant in Nanjing, China, recently started early pilot production of the car - and now Auto Express has been given ultra-rare access to drive one of the very first cars at this year’s CES in Las Vegas.

It’s a curious test, this – not least because in a way, Byton’s outstanding feature is not really linked to how the car behaves on the move at all. The company is targeting the new younger generation of customer for whom what really matters is not the thrill of an empty B-road, but rather connectivity and their own digital lifestyle. So the M-Byte – and all other Bytons – focus on delivering an immersive version of those requirements, the like of which we’ve never seen in a production car. 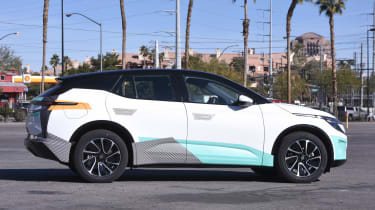 There is an astonishing dashboard up front: a 48-inch curved 4k-resolution OLED display that stretches from one side of the cabin to the other. Then there are two further touchscreens – one on the fixed hub at the centre of the steering wheel, and another more conventional tablet set-up between the front seats. It’s like Currys PC World’s on wheels, basically; small wonder that when the production M-Byte made its debut at last autumn’s Frankfurt show, it was a popular visit for the CEOs of the established car manufacturers.

Our test site is a common venue for previews at CES – namely, one of the vast chunks of deserted casino car park that exist a couple of blocks off the main strip. But it’s wide, open and littered with plenty of patches where the tarmac has broken up into a mix of potholes and loose gravel.

The car in question is a pretty special one to Byton: PP02, only the second model to come off the line. It’s a rear-wheel-drive edition with the smaller 72kWh battery pack - so this 4.9-metre long, 2.3-tonne SUV has 268bhp, enough for a 0-62mph time of 7.5 seconds, and a range of around 260 miles between charges. Byton says the car will be offered in four- and five-seat configurations, with boot space ranging from 550 litres to 1,450 litres with the second row folded down. 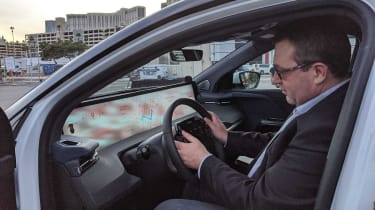 There’s no word on British pricing, although Byton boss Daniel Kirchert confirmed to us last year that the UK is one of his target markets. But based on the figures so far, it could cost from around £40,000 when it reaches our shores in late 2021 or early 2022.

PP02 has been in Las Vegas to give demonstrations to Byton investors sitting in the passenger seat, but we’re being allowed to take the wheel, on the condition that we ignore the odd bit of hard ‘dummy’ plastic trim, a common trait among pilot production prototypes.

The first thing that strikes you as you pull away is the ride. The M-Byte does without fancy tricks like air suspension; it’s just regular springs and dampers all round, because it doesn’t need to have any great sporting prowess along with cruising ability. Byton’s engineers just want to make their car comfortable. And it is.

The primary ride is actually pretty firm; body control is kept well in check, and the car doesn’t complain too much about being flung around with rapid changes of direction. But this allows the secondary ride to be relatively soft, helping the car to do very decent job of isolating us from the numerous creases and wrinkles in the car park’s surface.

Would that underlying stiffness come undone on the UK’s even worse roads? Perhaps it could become a little more unsettled, with a bit of extra head toss for passengers. But we’d imagine it would be more than adequate for Byton’s first target market (China), and also for the United States, which slots into the launch order just ahead of Europe.

Byton has made great play out of targeting processing power over horsepower - but in any case, the M-Byte doesn’t feel slow. There’s not quite the same jumpy initial response that you find in many EVs (not just Teslas), but in fact this is just down to throttle modulation. The electric motor punch is still there; it’s just delivered in a progressive fashion, and it’s none the worse for it. 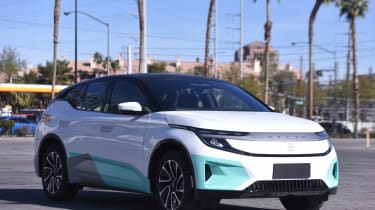 The feel in an EV’s brake pedal is, if anything, even harder to nail down, but the transition between where the Byton’s energy recuperation stops and discs and pads cut in is admirably smooth. The systems are still being honed, as Byton engineer Adwin Timmermans explains, to give different levels of recuperation and offer scope for ‘single-pedal’ driving, where the car will bring itself to a halt without use of the conventional brakes at all.

It’s refined, too. PP02 has the production sound insulation package fitted, and Timmermans is buzzing off the lack of, well, buzzing compared with the earlier prototypes. The fact that this is a rear-drive example probably helps, but the whine from the back is still admirably muted as we push the car under full throttle.

If we’ve a gripe, it’s the steering, which feels linear, but too slow and heavy all round. It’s work in progress, we’re told – but we hope that the final set-up gives more response around the straight ahead before the weight kicks in. 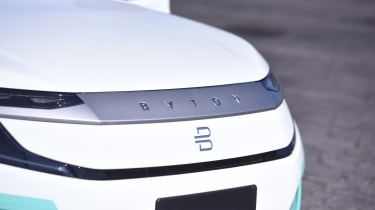 After we finish driving, Timmermans gives us some additional insight into what sort of content can be piped through that gorgeously crisp display when, for example, the car is parked up at a charging bay.

There’s a healthcare tie-up with Garmin that allows fitness freaks to geek out at their exercise data; a ‘mediation’ mode that plays soothing music and images that flood the car’s cabin; a multi-screen virtual meeting between several work colleagues on webcams (we beam in using the M-Byte’s two rear-facing ‘selfie’ units); or a computer game that can be controlled using the steering wheel pad.

And, yes, it can play high-definition movies when the car is sitting still - although we’d be interested to see how regular widescreen content can come close to filling a display with the Byton’s aspect ratio. Either way, it’s clear that the M-Byte has the potential to redefine what you do when you’re charging – one of the inescapable facts of electric vehicle ownership.

• Could you live with an electric car? The pros and cons

Here’s the thing, though: at this point, and only this point, do we realise that as we were focused on driving the car and noting its characteristics, we barely registered the display being there at all. Its positioning relatively far away, to the point where it’s not in your line of sight at all, has overcome the fact that it has been running in ‘daytime’ mode and full brightness, in fading afternoon light where its evening ‘dark’ settings may have been more appropriate.

It’s a timely reminder that for all the hype – indeed, almost controversy – about the Byton interior concept, the company has always maintained that the huge screen and steering wheel touchscreen will be usable and safe. Further time using the systems on the move would be needed before delivering a conclusive verdict on whether this is true; the user interface will ultimately play a huge role in how distracting it all is to use.

But, on the hardware alone – where it sits and how this works in relation to your view of the road ahead – the signs are encouraging.