The Tesla Model S P100D is blisteringly fast and now has a 381-mile range, but this all comes at a cost 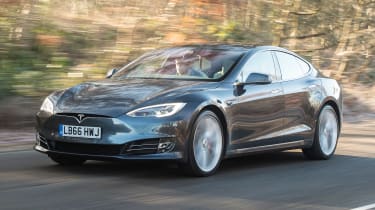 You can’t help but wonder when relatively simple physics will prevent Tesla from updating its cars with even more power, speed and range. But for now, the P100D is the fastest and most expensive Model S you can buy. The sky-high list price is a lot to ask for such marginal gains, though, so we’d suggest sticking with one of the still impressive cheaper models and spending the difference on a few choice extras.

It seems a week can’t go by without Tesla CEO Elon Musk announcing yet another power and performance upgrade for his unique range of all-electric cars.

Earlier this month, Musk revealed an ‘Easter Egg’, whereby over-the-air software would inject the already ridiculous Model S with an additional 33bhp, slashing the 0-60mph time to 2.4 seconds. It's called Ludicrous Plus mode, and is operable via the huge iPad-style touchscreen. 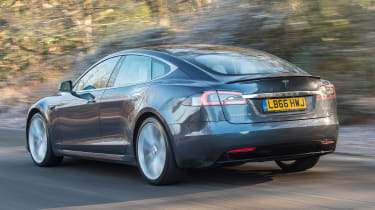 It’s the pre-Egg P100D we’re driving here for the first time, however, meaning the benchmark sprint takes a hardly lethargic tenth of a second longer.

Still monumentally fast, then? Absolutely. The Tesla Model S P100D replaces the P90D and feels quite unlike anything else on the road. Even a Porsche 911 Turbo S with its trick launch control system feels sluggish compared to the instant torque of a Tesla.

While our GPS-recorded test figures couldn’t better 3.3 seconds (without engaging the convoluted launch procedure) the way the P100D accelerates is simply mind boggling. The rush as you plant the throttle forces your insides against the seat, punishing your body with such violence that repeating the process more than once is enough to make even those with a steel stomach feel a little nauseous. 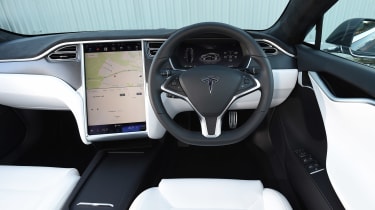 But it’s not only from a standstill that this new P100D shocks and stuns. Cruising at a steady 40mph, the Model S will breach the national speed limit in the blink of an eye – and carry on to an electronically limited 155mph. Tesla publishes a ‘passing speed’ of 45-65mph in 1.2 seconds.

Arguably Tesla’s biggest claim though, is the boost in overall range. While bosses readily admit that real-world range will plummet in cold weather, on a full charge this new P100D will do 381 miles when subjected to the NEDC cycle. That’s up from 316 miles on the now-defunct P90D, and a full 128 miles more than the entry-level 60D version. Utilising that instant acceleration will see those numbers drop pretty quickly, of course.

Unlike the lesser 60kWh and 75kWh models, the P100D is only available with Tesla’s Dual Motor all-wheel-drive system, offering up impressive traction in the current cold weather. There’s very little body roll thanks to the fact the batteries are mounted so low down, while the steering is well weighted. It doesn’t offer a huge amount of feel, but this is a saloon not a sports car, after all.

Owners love their tech-laden saloons and SUVs – as proven by our Driver Power survey last year. Despite reservations about range and usability, the Model S was rated top in seven out of 10 categories last year, including performance (predictably), practicality and ease of driving. The Autopilot software is still some of the cleverest of any car on sale, and takes the stress out of busy motorway driving.

Quality remains a sticking point for us, however. The familiar but ageing Mercedes switchgear is nicely integrated, but fit and finish is questionable. The huge portrait touchscreen is unique in this class, but the new E-Class shames the Model S when it comes to interior design.