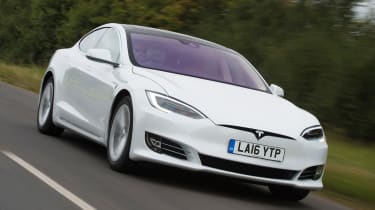 It may not be the fastest Tesla, nor does it boast the biggest range, but this 60D is the pick of the Model S line-up. Over 250 miles on a single charge is a long way – and at less than £58,000, it hits a sweet spot in terms of price, usability and performance. It’s not too difficult to spend that much on a BMW 5 Series or Audi A6, while Tesla’s compelling finance offers also mean you can lease a 60D for £430 per month.

The Tesla Model S is now the fastest accelerating production car on sale – but at over £114,000 for the P100D, that sort of performance doesn’t come cheap.

The fact that the fastest car on sale isn’t powered by a combustion engine is big news, but what’s likely to be more intriguing to most is this new entry-level Model S 60. At £53,400 (add another £4,400 for this 60D four-wheel-drive model), it’s just over half the price of the range-topping Model S, but promises the same zero emission driving and seats for seven on board.

The 60 may be the cheapest, slowest and most range-limited Model S on sale, but when you’re talking about Tesla, you can be in no doubt that this ‘budget’ Model S will still be light years ahead of every other EV on the market. Interestingly, the 60D actually uses the same 75kWh battery pack as the 75 and 75D variants, but pegs output at 60kWh. Entry point into Tesla ownership promises you 253 miles of range on a single charge and 0-60mph in 5.2 seconds. In terms of performance, we’re talking seriously quick hot hatch territory. Yet the Tesla feels even quicker than the numbers suggest. 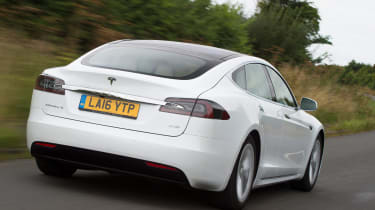 Like any other electric car, the immediate availability of all of that electric propulsion gives you rapid and drama-free getaways. The whine of the electric motors is your only soundtrack as you effortlessly hurtle towards the horizon. However, when you floor the throttle in the 60D, it doesn’t feel like your internal organs are trying to rearrange themselves, like they do in the P90D.

The forces involved still make you giggle; they just don’t leave you feeling nauseous as if you’ve been strapped to a rocket-propelled hunk of metal and leather.

At well over 2,000kg, the Model S isn’t a light car, but it rides with a considerable amount of fluidity. The £2,200 optional air-suspension undoubtedly helps, but the smaller alloys and fatter tyres make the 60D one of the best riding Teslas in the range.

What’s not so good is the steering. It’s consistently weighted, but numb in feel, leaving you guessing as to how much grip you have mid-corner. You learn to trust the traction of the four-wheel-drive system, rather than relying on what you sense through your fingertips.

The 60D also benefits from the latest updates made to the Model S line-up. At the front, there’s a blanked-off grille and subtly tweaked adaptive LED headlamps, while inside, a new optional air-filtration system that Tesla calls ‘Bioweapon Defense Mode’ keeps the cabin as sterile as an operating theatre. 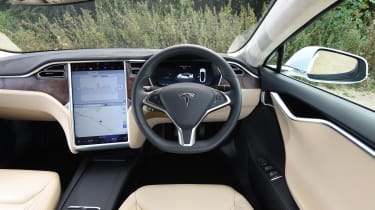 Tesla has also introduced a range of new dashboard trims and facias, which go some way to making the Model S feel more upmarket inside. Our 60D came fitted with a plush suede, wood and cream-leather combination, which made it seem well worth its near-£58,000 list price. Interior quality has previously been a bit of a gripe with the Model S, but the brand appears to be listening to owner criticism and acting upon it.

For a further £2,200, Tesla will also throw in its hugely impressive Autopilot system. No matter how much time you spend pounding up and down the motorway, handing total control over to the car is an eerie and unnerving experience, but the more time you spend using it, the more familiar it becomes.

It takes the tedium out of long journeys, and over time, will become a more sophisticated system as it learns to adapt to new roads via Tesla’s seamless over-the-air software updates.