The BLS is OK, but offers nothing new in a market overflowing with talent. 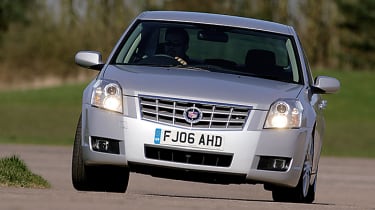 Driving The Cadillac is all about comfort and ease of use. The suspension is notably soft, and lean around corners is rather pronounced. As a result, it's not so involving, but there's plenty of grip. Our biggest gripe concerns the steering, which is too light, suffers from kickback and lacks the precision we have come to expect from an executive model. Yet the BLS is a capable cruiser, and refined on the move. Most models are expected to feature the 1.9-litre turbodiesel engine, also seen in the Vauxhall Vectra. It's a flexible, refined unit, but a bit of extra weight to the clutch, brake and accelerator would give the Caddy's drivetrain a smoother, more synchronised feel. There is also some vibration through the controls too; 2.0-litre turbo and 2.8-litre V6 turbo petrol-powered units are better in this respect, as is the twin-turbo diesel, which has a decent turn of pace, too.

Marketplace This is Cadillac's best chance to establish itself as a contender in the UK. Based on Saab's 9-3, the BLS adds distinctive styling to a proven mechanical package. The pricing is keen, for a range that includes three turbo petrol engines and, in a first for a modern Cadillac, a 1.9-litre turbodiesel. This oil burner comes in standard and high-performance twin-turbo form. Given that the basic proportions haven't changed, Cadillac has been remarkably successful in differentiating the compact executive saloon from the car it's based on. It is offered in saloon and estate guise – the latter is Cadillac’s first-ever estate – and there is a single very well-equipped Elegance trim, which includes sat nav and leather. Enough to tempt people from their Audi A4s, BMW 3-Series and Mercedes C-Class?

Owning Annoyingly, Cadillac has retained the same finger-trapping handbrake as on the Saab 9-3. It's a perfect example of form over function. Still, the centre console is unique, and looks and feels suitably upmarket, offsetting a steering wheel, indicator stalks and window controls shared with the 9-3. Adding to the interior's charms, the ergonomics are sound, while the seats offer a decent range of manual adjustments. Tall drivers may find themselves wishing for a little more reach on the steering wheel, however, and there's not enough side bolstering to prevent you from sliding around a little during cornering. But the generous rear headroom makes the BLS a practical proposition for adults in the back, as does a deep 425-litre boot. The estate is as well-planned as the Saab it’s based upon, too. Servicing is less practical though, with rather short 10,000-mile intervals and a glaring lack of Cadillac dealers throughout the UK. Residuals are also no better than creditable, though diesel models are the most economical cars Cadillac has ever made, with 46mpg claimed on the combined cycle. 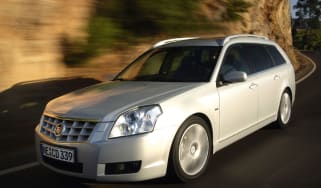 Cadillac's BLS estate offers attractive pricing and a generous range of standard equipment, but is that good enough?
Cadillac BLS 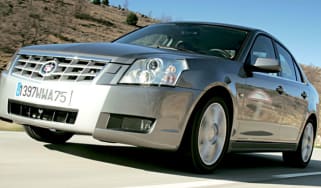 If ever an American model should be a success in the UK, this is it - the BLS. Could it be the American dream?
Skip to HeaderSkip to Content