If ever an American model should be a success in the UK, this is it - the BLS. Could it be the American dream? 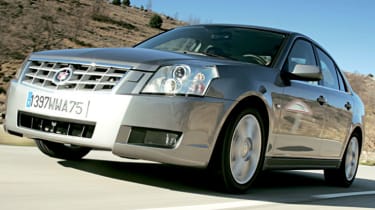 It's the car Cadillac had to get right, but have designers done enough to better the Audi A4 and BMW 3-Series? First impressions are that they've finished wide of the mark. Diesels are key in this market and the BLS oil-burner's numb steering is a letdown. But competitive prices, a smooth ride and striking looks could be enough to tempt some buyers.

With the well known badge on the bonnet, Cadillac designers have focused on making a car purely for Europe for the first time. And featuring dimensions that pitch it squarely at the hugely popular compact executive class, the resulting BLS could be the firm's big breakthrough.

Cadillac is already selling vehicles in Britain but, since dedicated dealers opened their doors on these shores last year, the message has been clear: "The BLS will be the top seller." Now the time has come to see if the saloon can cut it with the best.

A dominant grille and boxy rear, featuring vertically stacked light clusters, will appeal to buyers looking for a saloon that stands out on the road.

The interior layout is simple with clear dials, an uncluttered console and a high-quality Bose stereo. Air-con and an on-board computer are standard, but the BLS is let down by cheap plastics on the door handles and the tacky analogue clock. The thumb-trapping handbrake, borrowed from the Saab 9-3 - which is built on the same platform - also irritates. In the back, the BLS is cramped, with limited legroom for passengers. The biggest problem for drivers, though, is the pedal arrangement, as they are deep-set and sit close together. And it's a pity the seats don't offer better side support - cornering results in occupants sliding round.

But a slippery chair won't be the only reason for drivers clinging on to the wheel. If there's one thing that a US car company designing a vehicle for Europe has to get right, it's the steering. Yet we couldn't help but be disappointed by the lack of precision and feel through the BLS's system.

Thankfully, not all models have the same set-up. The high-performance 2.8-litre V-6T petrol variant's steering has been uprated to give a sportier feel than that of the less powerful versions. We drove the V-6T and diesel back-to-back, and the 255bhp petrol model is very refined with plenty of pace, but suffers from noticeable turbo lag. Only wind noise and a slight whine from the automatic transmission break the silence in the cabin.

The firm's first turbodiesel - a 1.9-litre 150bhp TiD - is also remarkably quiet. Coupled to a six-speed manual gearbox, it delivers peak torque at 2,750rpm, and doesn't suffer from the same lag as the flagship petrol model.

Both cars are front-wheel drive and benefit from a well cushioned ride, which makes the Caddy a comfortable long-distance cruiser.

The BLS goes on sale in the UK next month at the firm's 12 showrooms, and another six dealerships are set to open by the end of the year. Cadillac hopes to get round the problem of its limited network by offering customers a collection and drop-off service.

Three grades of trim are offered - Comfort, Elegance and Sport - with prices starting at around £20,000 for the entry-level 2.0-litre 175bhp turbo petrol, rising to £31,000 for the range-topping V-6T petrol variant.