The SRX is has a high-quality cabin and is adept on twisty roads and motorways. 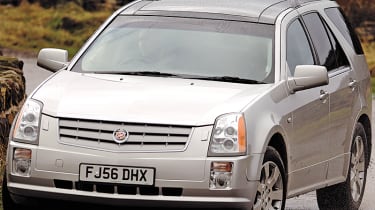 Driving The big SRX boasts a smooth 3.6-litre V6 petrol engine. The smooth unit is mated to a five-speed automatic gearbox, giving decent pace. Acceleration to 60mph in 9.3 seconds is competitive, while in-gear performance is also impressive. On the road, this translates into a relaxing experience. The SRX feels sprightly and keen to respond to the throttle, while the engine doesn't have to be pushed that hard. The handling is also a pleasant surprise. It's far from car-like, but it's not the large, unwieldy beast you expect. Instead, it has quite firm suspension, and body control is fairly good. It doesn't wallow too much in bends and the steering has decent feel. The ride is OK too; the model soaks up bumps and potholes well, and is a good motorway cruiser.

Marketplace The SRX has been on sale for a few years, but only in 2007 was it offered in right-hand-drive guise. And little prepares you for seeing one in the flesh. Make no mistake, this is a big SUV with plenty of road presence. Yet thanks to the well proportioned styling, it hides its size quite well. It looks more like a large estate, and the long LED tail lights give it a modern, upmarket appearance. Its upmarket credentials mean Cadillac see it as a rival to the Range Rover, but with a bargain price in its favour. It's also positioned close to the Audi Q7, BMW X5, Mercedes ML and Volvo XC90.

Owning Billed as a seven-seater, you wouldn't put your worst enemy in the rearmost row. A high load floor makes them uncomfortable for adults, and there are no headrests either. They can be (slowly) folded out of the way at the press of an electric button though. There's plenty of room in the middle room, too. And though American cars have traditionally been blighted by poor interiors, the SRX's cabin surprised us. Soft-touch plastics give an upmarket feel, while the twin glovebox is clever. Some of the switchgear is low-rent though, and the cheap plastic and nasty wood on the steering wheel is disappointing. The rim doesn't move for reach, either, although the SRX does get electrically adjustable pedals, and the driving position feels quite car-like. It's decent value too, and equipment levels are impressive. However, the lack of a diesel engine and V6 engine's thirst means fuel bills will be high, and residuals are unlikely to be very good.