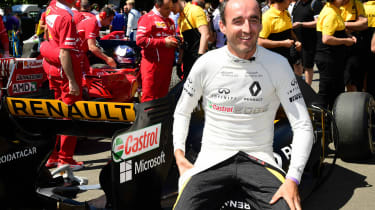 Robert Kubica has completed the test that could make or break his fairytale F1 comeback, more than six years after a rallying accident left him with a partially severed right arm and a promising career in tatters.

"It has been an incredible journey to this point, where I have answered many questions to myself," said Kubica, reflecting on his efforts. "I was able to work through the team’s programme methodically and I think we made good progress.

"After today, it’s too early to say what the next step might be."

Kubica - who clinched his sole F1 win at the Canadian Grand Prix in 2008 - was invited to test a 2012-spec Renault in Valencia back in June, after which the team was convinced he'd recovered from his injuries sufficiently enough to make a full-time return possible.

While the movement in Kubica's right arm remains limited, a further shakedown at Circuit Paul Ricard in the 2012 car proved that the Pole still has the pace to compete in F1, and a positive result in his latest run in Renault's 2017 car will almost certainly make him a contender for a race seat in the near future.

Speculation about the struggling Jolyon Palmer has intensified lately following a string of disappointing results, with teammate Nico Hulkenberg scoring all of Renault's points so far in this year's championship.

This has raised the prospect of Kubica taking his place mid-season, but if this doesn't materialise the 32-year-old could be an option for Renault - or any other team - in 2018.

During his appearance at the Goodwood Festival of Speed a few weeks ago, Kubica told Auto Express that he rated his chances of an F1 return at "80 or 90 per cent". Here's what he had to say full...

As you were pulling into the garage here, the Polish fans were shouting, ‘Robert come back!’. Is their dream of a first Polish F1 champion still alive after all?

“We’re going too far forward. Massively too far. The best day for me would be if I can drive and I feel like I’m driving exactly the same as I was doing before the crash. This would be my personal best goal that’s achievable for now, I think.” 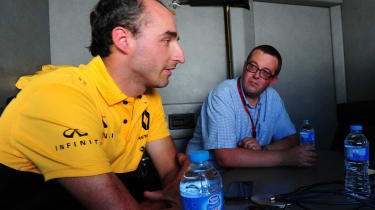 So tell us about Valencia. You did 115 laps in what is believed to have been a recreation of a full F1 weekend?

“Yes. I knew a bit earlier about this test - maybe not 100 per cent but I knew something was in the air - so I started preparing quite strongly.

“I try to be prepared as best as I can; of course I have my limitations. I have to compensate with my left hand so it has to be fitter than ever I was in the past. And I am. My physical fitness preparation was never so good as it is now. It costs a lot of time but now it has become a kind of daily routine for me, which is giving me a good feeling of daily life.”

Did you choose Valencia because it’s quite a twisty circuit?

“Before the test I was asked which circuit I’d like to go to and I said, ‘I have no preference.’ It would be more difficult there, yes, but there it is; I don’t have to hide anything because mainly it was the possibility to see in what level I am, and at what level I’m still capable of doing this job, and how I will feel.

“Valencia is quite a flat circuit, so the oscillations of the energy from the bottom of the car are not high to your back, but still it’s quite twisty and there are not a lot of straight lines. It’s quite a high-level fitness circuit - not as high as some other tracks, true, but there’s still quite a lot to do. Additionally we had extremely hot weather; the tarmac temperature was over 60 degrees. So it wasn’t an easy day on tyre management, and so forth. But it was nice; I have to admit that it was one of the best days of my life.”

So what is the status now?

“My first target was to see if I could be capable of doing it. So this is more or less done. Second, let’s say, realistically talking, is raising the game slowly and step by step. F1 is a tough competition and I have been away from racing a long time. I think most of the question marks I had are gone, and I’m very comfortable with it. Actually it was a huge relief for me because this test would have been a case of, ‘Yes, I can do this’ or ‘No, I have to close the door on F1 forever’.”

The stakes were that high?

“For me personally, yes. I know it seems strange because I was away for a very long time and I kept quiet, but I never said that I’d never be back. Because I knew that there is a chance for me. I always said it would be very difficult. But Valencia showed, in fact, that it’s not really as difficult as I thought. It’s more possible than I ever thought. It’s a good feeling and I’m happy that I have this day done. 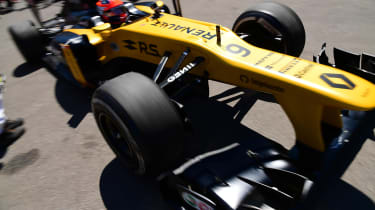 “Also as a human being, I see that not necessarily everything is over. If I get the phone call, I don’t have to think about it or say, ‘Hmm, maybe I can’t do it.’ I will reply, ‘Yes, I can do it. Let’s go for it.’”

So are you waiting for the phone to ring now?

“This may sound strange, but I’m not an 18-year-old rookie who wants to get to F1 at any cost. I want to be in F1 if I’m 100 per cent sure I’m capable of doing the job. This is the target I would like to achieve. For me there are still a few steps to be done and I will see how I react. But when you get rid of 80 per cent of the doubts you had in one day, it really does give you a fantastic feeling. This is what happened in Valencia.

“I was shocked, to be honest; it was really, really impressive, feeling-wise. I’m not talking about pace there - a few tenths here, a few tenths there - but the feeling and the impression I had, straight away, were amazing."

So what is the next step - another test?

“For sure. I cannot step straight into racing F1. I won’t do it. It’d be crazy. If someone called me and asked me to race next week, I wouldn’t do it. It’s not because I don’t feel I’m capable of doing it; I just feel that I cannot rush. It would be a difficult call to say no, of course, but after the accident I worked a lot on my mental comfort, my mental zone, and these months have been the happiest months of my past six years. So I will like to let them go as long as possible, and jumping in too early would bring high risk that things could go wrong. 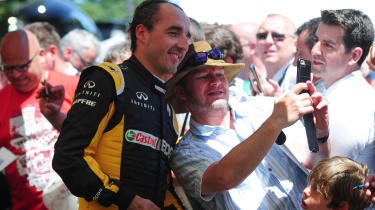 “If you asked me how much I was realistically thinking that coming back to F1 was possible, I would have put myself up to 10 or maximum 20 per cent chance. Because the clock is running - not just the classification, but also getting older. F1 is going so fast that some people forget - not everyone, but some."

“Yeah, it is. But you build up your own question marks, based on how you know yourself and your body, and then if you’d asked me about them after even the first run at Valencia, they were gone, gone, gone, gone. Then it becomes much easier than I thought. This gives you good confidence and puts you in a completely different level - of trying to have a better feeling in the car and better performance. Once my comfort, or let’s say limitation things, were gone in three laps, I could concentrate on trying to get back to the proper rhythm. I’m surprised how it felt; it felt for me like I hadn’t driven for one month, not six years.”

Are you excited by the idea of Robert Kubica's return to F1? Let us know in the comments!