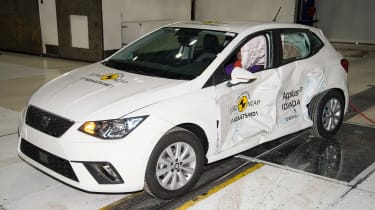 Euro NCAP has just released the latest clutch of crash test results, with star ratings assigned to six new cars now on sale in Britain. The Ford Mustang has also been retested – the muscle car made headlines earlier this year when it received a disappointing two star rating, but Ford has since updated it and run it through the gauntlet again.

The new SEAT Ibiza – recently named best supermini at our 2017 New Car Awards – gets a full five-star rating. That’s part in thanks to the refreshed Euro NCAP criteria, placing an emphasis on not just how a car behaves in an accident but also on safety equipment. Autonomous emergency braking is fitted as standard to SEAT’s new supermini, earning it the maximum five star score.

Euro NCAP Secretary General, Michiel van Ratingen, said: “The greater the extent to which these new technologies are fitted, the better and faster will be the progress in safety on our roads, to the benefit of all.” 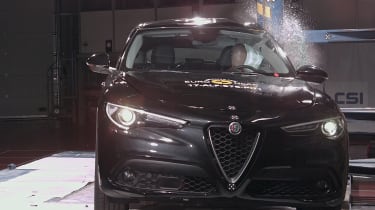 Moving up, two new B-segment entrants have been put through their paces. Hyundai’s new i30 gets a five-star rating with solid performance in every key area. The new Honda Civic gets four due to lower than expected child protection.

Both the new Volkswagen Arteon and Vauxhall Insignia Grand Sport have notched up full five-star ratings, as has the Alfa Romeo Stelvio – the firm’s first road-going production SUV managed to score 97 per cent for adult occupant protection.

The recently facelifted Ford Mustang has been updated in a bid to improve its low two star score. Changes to the frontal airbags have been mated to the addition of autonomous emergency braking and lane assistance as standard, resulting in a revised three star rating.

While three stars is still unremarkable, Michiel van Ratingen welcomed the changes, explaining: “It is good to see that after 20 years Euro NCAP’s call for safety improvement still strikes a chord with responsible companies like Ford.”

How much do Euro NCAP scores matter to you when buying a car? Tell us in the comments.