The new Vauxhall Insignia Grand Sport aims to resurrect the repmobile with an upsurge in style, quality and value. Will it work?

Vauxhall reckons the new Insignia Grand Sport can compete with the BMW 3 Series and Audi A4. These are lofty aims and while the Grand Sport is comfortable, quiet and good to drive, it doesn’t have the premium feel to match those cars. We expect the 1.6-litre diesel to be a better fit than our underpowered 1.5 petrol but the Insignia Grand Sport offers excellent value compared to traditional rivals and should prove impressively affordable as a well-equipped company car.

With millions of buyers migrating to an ever-improving range of SUVs and executive saloons, D-segment family cars like the Vauxhall Insignia have started to drop away down the sales charts.

Not deterred, the Luton-based manufacturer has recently revealed an all-new model - this time called the Insignia Grand Sport. It has high hopes, too, with its sights set firmly on premium competitors like the BMW 3 Series and Audi A4 as well as traditional rivals such as the Volkswagen Passat and Ford Mondeo.

The Insignia Grand Sport is on an new platform, which has allowed the car to grow substantially - it’s now almost as large as full-size executive models like the Mercedes E-Class in the class above. The wheelbase is significantly longer too, thanks to shorter overhangs than before, allowing extra legroom for rear-seat passengers. 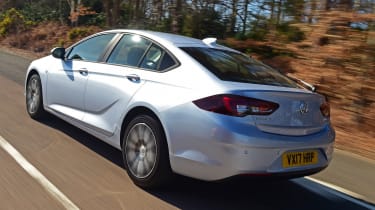 In fact, the usually class-leading Skoda Superb will find true competition from the Insignia Grand Sport in terms of rear-seat space, as there’s loads of legroom in the back - although the Vauxhall’s swooping roofline means headroom isn’t quite as good.

That comes as part of the car’s visual overhaul, a package of new design features that includes a large, flat grille on the front, stylised daytime running lights and sculpted doors at the sides. The long bonnet features a crease right in the middle, and the boot lid features a subtle spoiler.

It’s an understated look, but more elegant than the previous Insignia and undeniably more eye-catching than most of its rivals. The only thing that can really spoil the look is the ugly rear wiper, which sticks out of the bootlid like something from the 1970s.

The interior design will be familiar to anyone who has driven a current-generation Astra, and while it’s technically a new design, many elements are very similar, including the steering wheel, media controls and other instruments.

Material quality is good, and the fit and finish is even a match for the excellent Skoda Superb – but the hard plastics and dull design mean the Insignia Grand Sport will never beat the A4 or 3 Series for perceived quality.

Once you’re on the move, though, the new Insignia is rather impressive. The ride is smooth in town, and while you’ll notice bigger bumps when moving a bit faster, the compliant suspension set-up keeps things very composed in the cabin. 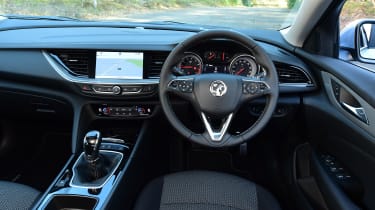 It’s quiet, too. Engine noise is almost non-existent at motorway speeds and wind and road noise is kept at bay as well. All of that means it’s just as good at cruising up and down the motorway as a Passat, or even an A4. That’ll be hugely important for the people buying this kind of car, which is overwhelmingly driven by fleet buyers.

Still, throw the Insignia into some corners and you’ll discover that it’s also good to drive. The steering is heavy enough to make the car fun without ever feeling tiring to use, and there’s enough feel as well. There’s a bit of body roll, but weight savings over the previous model (175kg on average) mean it’s more agile than you’d expect for such a big car - and almost as nimble as the smaller Astra.

It’s more rewarding to drive than a Mondeo and even feels livelier than an A4, but for driving fun even an entry-level 3 Series is a better choice. Against traditional rivals, though, the Insignia Grand Sport is up there with the best in its class in terms of the nimbleness and composure it shows on the road.

The 1.5-litre petrol engine, while being a smooth and reasonably efficient unit, feels a bit flat in the Insignia. It’s just about torquey enough for in-gear overtakes, but even if you change down you’ll find that there’s not much grunt at the top end of the rev range.

All in all, it feels a little underpowered for a car of this size. We suspect that the predicted top seller, the 1.6-litre diesel, will be the best option - and with economy of 70.6mpg, it’s much more frugal than this 47.6mpg petrol car. 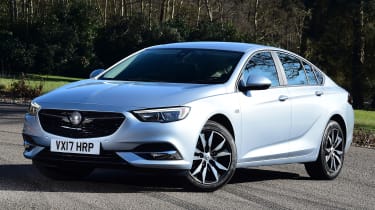 The manual gearbox isn’t as slick as the one you’ll find in the VW Group models (the A4, Passat and Superb), and the stick itself isn’t very comfortable to hold. But there is a pleasing weight to both the shift and the clutch, giving the Insignia Grand Sport a substantial feel.

The driving position is comfortable, there’s plenty of adjustment for any size of driver, and even though you sit fairly low, the shoulder line is also low enough that visibility is good. Our car featured parking sensors as an option, and it’s one we’d recommend as the Insignia does feel a bit cumbersome in tight car parks and rear visibility isn’t such a strong point.

The boot is big and square, so there’s plenty of room for suitcases or even bikes, but at 490 litres with the seats up it doesn’t match the cavernous Superb, which has 625 litres. Even the Passat’s 586-litre space is bigger, though the saloon-style opening in that car makes it less versatile overall. 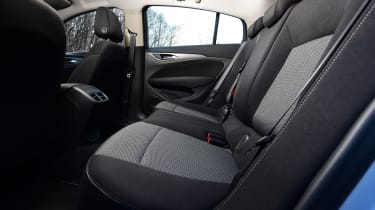 Where the Vauxhall has the edge over its competitors is on price: at £17,910 without options, our near-base-spec car is very well equipped for the money. It features sat-nav, air-con, cruise control, an eight-inch touchscreen, DAB radio, full smartphone connectivity, keyless go, a leather steering wheel and even a Wi-Fi internet connection.

Even options such as a heated windscreen, alloy wheels and climate control look reasonably priced - especially next to the extortionate extras on premium rivals.