The new Arteon is Volkswagen's attempt at a premium coupe, but can it tempt buyers away from BMW and Audi? 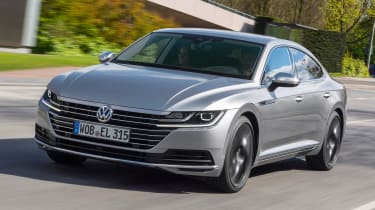 VW’s latest push into a premium market sector is a stylish, comfortable and capable attempt. It remains to be seen whether the Arteon can lure buyers away from established executive car rivals such as those from BMW and Audi, but if you can look beyond the badge snobbery there's no reason to ignore it. Sure, a BMW 4 Series Gran Coupe is better to drive and an Audi A5 Sportback more luxurious, but the VW's more distinctive look will get it noticed in the company car park.

What makes a car premium? There’s an argument that the badge, the price, the technology, or even the way it looks can define whether a car is ‘premium’ or not. But as a rule of thumb, it's a mix of all of the above that contributes to a car making the premium grade, or not.

Volkswagen is serious about upping its premium image to take on BMW and Audi, with bosses promising that its cars will begin to look more 'emotional' – which you can take to mean more interesting. VWs make a lot of sense to a lot of people, but very rarely does someone buy one because it makes them weak at the knees. Sensible has long been the name of the game for Volkswagen.

The all-new Arteon is the brand’s first attempt at cracking the mainstream of the premium market, and it gets off to a good start. It has all the right lines and curves in all the right places; its chiseled jaw and swooping roofline means it looks unlike anything else in the current product range. To say it’s the most handsome model in VW’s line-up wouldn’t be an exaggeration and even up against other stylish four-door coupes like the BMW 4 Series Gran Coupe and Audi A5 Sportback, the Volkswagen comes out on top. 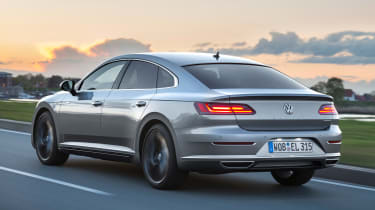 It’s an indirect replacement for the old CC and is based on the brilliantly engineered, but visually lacking, Passat. At 4,862mm long and 1,871mm wide, the Arteon is bigger than both the 4 Series Gran Coupe and the A5 Sportback, while a 2,841mm wheelbase makes it more spacious for those inside, too. In fact, the Arteon is actually longer and wider than the Passat with which it shares so many parts.

But VW wants you to think of the Arteon as a separate model and not a variant of the Passat – hence the new name, new proportions and more advanced tech. It’s based on the MQB chassis but features several new engines that aren’t available in the standard car. The first is the VW Group’s new 148bhp 1.5-litre four-cylinder turbo petrol that debuted in the SEAT Ibiza, while the other is a Golf GTI trumping 276bhp 2.0-litre. VW bosses are even discussing introducing a new high-power six-cylinder engine, too.

Initially, though, VW will only offer buyers the choice between two engines: the 276bhp turbo or a 237bhp 2.0-litre bi-turbo diesel as tested here. Both feature a seven-speed dual clutch automatic gearbox and 4MOTION four-wheel drive as standard.

Final specifications and prices will announced closer to the car’s launch in October, but don’t expect any change from £38,000. Depending on spec (only Elegance and R-Line trims will be offered) and with options that figure could breach the £40,000 mark. 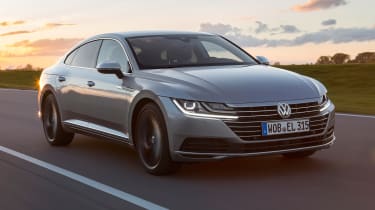 Of the two engines, the bulk of buyers are expected to go for the bi-turbo diesel. Sharing much of its DNA with the Passat, it’s unsurprising to find the Arteon feels and drives very much like the saloon - that's to say it’s impressively refined, easy to live with, and very functional.

The quality of the ride, however, does come as quite a surprise. That’s not to say it’s poor, far from it. Despite riding on arch-filling 20-inch wheels wrapped in a slither of rubber, the Arteon rides with real composure and comfort, gliding over smooth surfaces. The result can be attributed to the bespoke damper system developed exclusively for this car. Potholes are its undoing, though – hit one and a noticeable thump makes its way through to the cabin.

VW’s adaptive damper system comes as standard if you go for the 237bhp bi-turbo diesel, with the usual choice of Comfort, Normal and Sport modes. Normal is the Arteon’s preferred setting – reigning in the loose body control of the Comfort mode, while remaining much more forgiving than Sport. 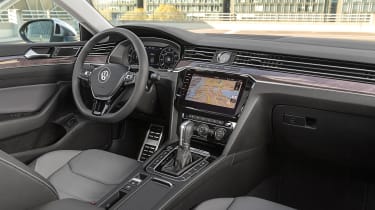 Whichever mode you’re in, though, don’t expect 4 Series levels of driver engagement. The Arteon is designed to be a stylish, long haul cruiser, not a four-door sports car. The steering isn’t brimming with feedback but it’s accurate enough, making the Arteon feel more agile than its size suggests. Unfortunately, however, our test route in and around Hannover, Germany, didn’t give us a chance to fully assess the Arteon’s dynamic repertoire.

The 2.0-litre biturbo diesel is an incredibly strong motor, though, hauling the Arteon from 0-62mph in just 6.5 seconds. The combination of 500Nm of torque and 4MOTION four-wheel drive makes it doubly effective at dragging you out of slower corners and passing dawdlers on the motorway. It isn’t the most efficient, though, returning a claimed 47.8mpg – a six-cylinder BMW 430d xDrive will manage over 51mpg.

On a practical level, the Arteon scores much better. The more shapely body has come at the expense of a slightly reduced boot capacity, but the 563-litre load bay is only 87 litres smaller than you’ll find in a Passat. Both the BMW and Audi can only serve up 480 litres of space. That plunging roofline has only stolen a few millimeters of headroom, too, but those over six foot will be more than comfortable in the rear. There’s also acres of legroom.

While the overall cabin design and feel is on par with the BMW, the Arteon doesn’t quite match the Audi when it comes to perceived quality. The cabin is essentially a carbon copy of that from the Passat (no bad thing) albeit with VW’s latest 9.2-inch infotainment system fitted.