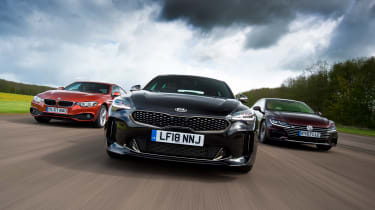 The four-door Kia Stinger coupe has already proven its worth, having beaten the Audi S5 Sportback in a twin test back at the start of the year.

However, that was in sporty GT S guise. Here we’re testing the Korean car in more affordable and arguably more relevant diesel form, which means it’ll have to face off against some German giants.

The Volkswagen Arteon offers a similar solution to the Stinger, serving up more style than a conventional saloon such as the brand’s Passat, with decent dynamics, sporty looks (like the Kia in the trim we’re testing here), a good level of kit and a balance of performance and economy.

For years BMW was king of this class, offering a sportier brand image and cars that backed this up with their driving experience.

The man behind the set-up of the Stinger was poached from BMW – Albert Biermann is the former M division boss – so it’ll be an interesting test to see if the Kia can beat the German firm’s 4 Series Gran Coupe and whether there are any similarities in how the cars feel from behind the wheel.

But at nearly £40,000, is this a bridge too far for the Korean brand, or does Kia’s traditional value for money still shine through even at this end of the market? Read on to find out. 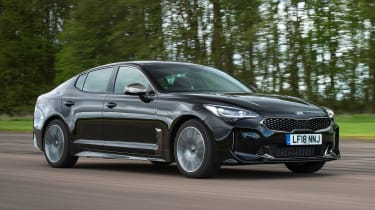 We’re testing Kia’s 2.2-litre diesel Stinger in top-spec GT-Line S spec, which costs a not insignificant £37,425, but comes loaded with equipment. Given how competitive this class is, the Kia will have to deliver all-round appeal. We find out if it succeeds against some talented opposition.

The Kia acquits itself fairly well once you’re under way, too. That heavier kerbweight did hamper the on-paper performance advantage at our test track, but the Stinger still sprinted from 0-60mph in 7.6 seconds, which was a tenth faster than the Arteon, but one tenth behind the 4 Series. 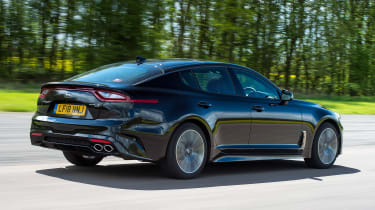 The 440Nm of torque and eight ratios in its box meant it was flexible enough in gear, too. It lagged a little behind the eight-speed BMW, but only by a few tenths in each of the taller gears from 50 to 70mph, and not so much that you’d notice on the road.

What’s more important is the quality of the shift. While the box is smooth in auto, it’s not as quick to swap ratios as the BMW’s, or quite as snappy as the VW’s DSG set-up. At a canter the Kia is refined, but push it harder and acceleration is hampered more noticeably by the jerkier gearchanges, while the engine gets a little coarse, too, although both of its rivals suffer this as well.

Combined with the sweet chassis set-up, the weight and long wheelbase mean the Kia rides smoothly. Only at the edge of its envelope does the ride feel brittle, because the dampers have to dissipate the energy more quickly. At a relaxed pace the Stinger feels, well, relaxed. The steering is a nice weight but doesn’t have the BMW’s more incisive, communicative feel or the VW’s precision. This partly stems from the fact the Stinger rolls when you up the pace. 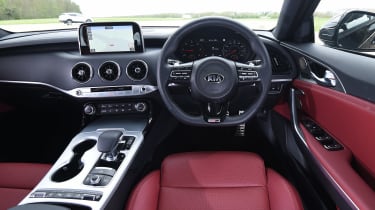 It feels all of that 1,810kg, too, as it lacks its lighter rivals’ agility, while the longer wheelbase means it doesn’t turn as quickly, either. However, as a road car for munching motorway miles and making swift progress on twistier tarmac, the Stinger is adept.

The engine and transmission package is refined enough as long as you keep a lid on your enthusiasm, while the ride quality means all but the worst bumps and imperfections are smothered sufficiently. It’s a safe rather than scintillating package.

Testers’ notes: “There’s no permanent manual mode for the box. While you can change gear using the paddles, the transmission defaults back to auto, which is mildly annoying if you want to take control yourself.” 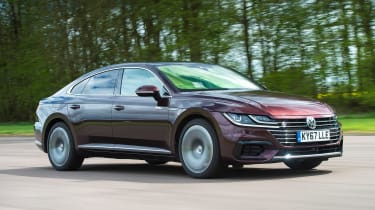 The Volkswagen Arteon has already proven its credentials against the Audi A5 Sportback, which is why that rival isn’t part of this test. But can the VW beat the Stinger’s value for money and the BMW’s dynamism? We test the Arteon in £36,835 2.0 TDI 190 DSG R-Line form to find out.

The DSG-equipped Arteon’s launch control helped in the 0-60mph sprint, but the VWs front-wheel-drive layout meant traction wasn’t as good as its rivals’. Some wheel spin off the line resulted in the slowest time of 7.7 seconds, although it wasn’t by much. 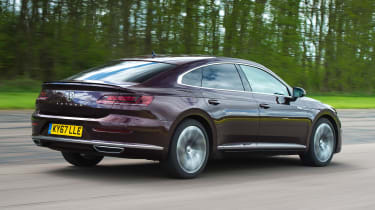 It doesn’t have the in-gear performance of its rivals due to having one ratio fewer, but if you leave the box to its own devices then acceleration is good.

And it takes a prod of the throttle to make the box kick down; even then there’s a delay before it lurches forward in the right gear. Still, if you cruise gently then the DSG slices between ratios sweetly. It’s even better in manual mode, with precise changes.

That precision is replicated in the VW’s steering. There’s more grip than with the Kia, and while you get very little information from the front wheels, you’ll be surprised at the Arteon’s performance.

On this R-Line model’s 19-inch alloys the ride isn’t as good as on smaller wheels, but in the suspension’s Comfort mode it’s okay. Big intrusions still cause a crash, but on patchy surfaces the dampers control body and wheel movements fairly well. However, we wouldn’t really feel the need to select anything other than Comfort for the chassis, because the sportier settings upset the ride further for no real benefit.

Other drawbacks include the VW’s snatchy brakes. They’re more difficult to modulate, while the DSG cuts in aggressively when manoeuvring.

Testers’ notes: “Arteon’s execution is well judged. There’s just enough familiarity from using many common VW parts, but the styling and interior mean it feels a cut above many other models in the range.” 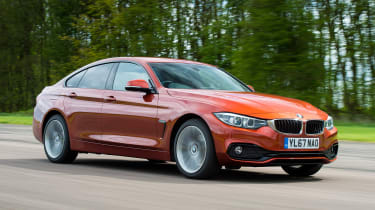 BMW’s 4 Series Gran Coupe is the more stylish, four-door alternative to the firm’s 3 Series saloon and, at £40,075 in 420d xDrive Sport trim, a direct rival to the Kia and VW. But is it a better bet?

From the moment you get behind the wheel, it’s clear the 4 Series is the sweetest-handling car of this trio. It’s not uncomfortable and matches the VW for refinement, but even in the dampers’ Comfort mode the ride is a little busier and more tautly controlled. 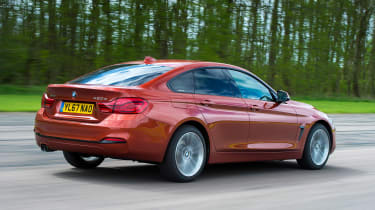 However, this pays dividends when you find a snaking road. The steering has the nicest weight and response, while the chassis retains its composure to a level its rivals can’t match. Even in this four-wheel-drive car you can feel its inherent balance; it’s more alert and more agile than either the Kia or VW.

Settle down to a cruise and that more rewarding set-up for drivers doesn’t affect comfort too badly, because the chassis rides with a level of suppleness that means only harsh intrusions cause the axles to rebound rapidly. The powertrain is refined, too. The gearbox shifts smartly and smoothly, while it’s a match for the VW in manual mode. 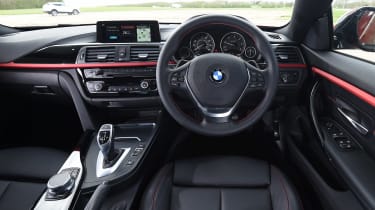 At the test track, the engine delivered a decent turn of speed, with xDrive traction off the line helping the 420d to sprint from 0-60mph in 7.5 seconds. It was also the quickest car over all our in-gear tests by some margin.

Testers’ notes: “Unless you’re really worried about a snow flurry, we’d save some cash and go for the rear-drive model. This means you can also upgrade to M Sport trim, which is just £500 more than the Kia.” 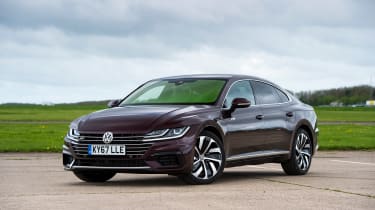 The Arteon is the winner thanks to its all-round ability. It’s the cheapest car here, comes really well equipped and offers lots of usability for families with more of a stylish edge than a basic saloon. It’ll also be the cheapest company car, delivers strong economy and will hold on to its value well, too. The hi-tech features inside mean it has the measure of the competition here. 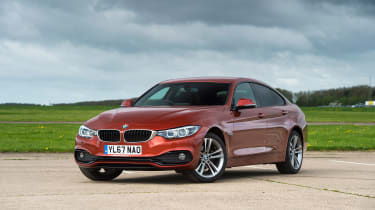 Keen drivers should go for the 4 Series Gran Coupe. A rear-wheel-drive M Sport model could leave the Arteon trailing, but while an xDrive Sport version is still beautifully balanced, handles sweetly and offers strong performance, it’s a little pricey and not as well equipped. Refinement, economy and comfort are good, plus it splits its competitors here when it comes to practicality. 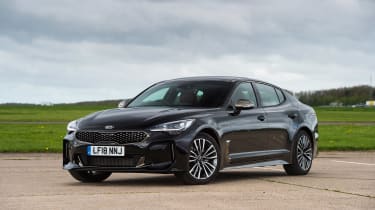 In diesel form the Stinger is still a fine first effort from Kia, but its rivals’ years of evolution show in key areas. Although it remains a strong alternative choice, in this company the higher running costs, slight practicality drawbacks and not-so-dynamic driving experience count against it. We’ve no complaints with the comfort, refinement or the kit on offer for the cash, though. 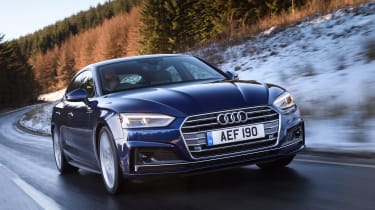 The A5 Sportback is competitively priced, offers strong performance and lots of tech and quality inside. It’s more like the Arteon than the 4 Series to drive, but a 480-litre boot means it has practicality to match the BMW. 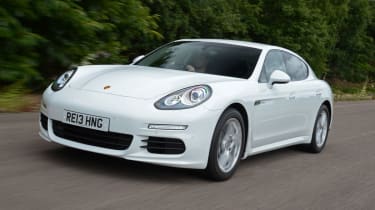 Porsche no longer makes a diesel Panamera, but that doesn’t mean you shouldn’t buy a used one. This 2011 car is similar in concept and costs similar money now. It offers more prestige, performance and effortless cruising ability.