We've already driven the V6 Kia Stinger, but how does the 2.2 diesel model compare? We find out... 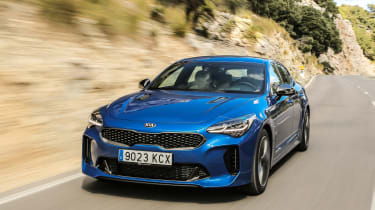 Given this diesel Stinger is Kia’s first foray into the usable and efficient, but stylish and sporty, executive niche, it’s a relative success. It rides and handles well, while the powertrain delivers enough performance, even if it trails on the efficiency front. The car is also well equipped, so if you can get your head around a £37,000 diesel Kia you shouldn’t be disappointed – even if it’ll be a hard sell against more premium brands in this market.

While the V6 Stinger might be grabbing the headlines for Kia, it’s this 2.2-litre diesel that’ll take a bigger chunk of sales – accounting for 40 per cent of the 1,800 units Kia hopes to shift each year in the UK.

The diesel comes in two trim levels: GT-Line and GT-Line S, like our test car, with all UK models featuring an eight-speed auto gearbox sending drive to the rear wheels.

With 197bhp and 440Nm of torque, acceleration is smooth and progressive, even if the familiar engine is a little grumbly under load at higher revs. Still, the 0-60mph sprint takes just 7.3 seconds, but it’s the in-gear go that gives this car its flexibility. 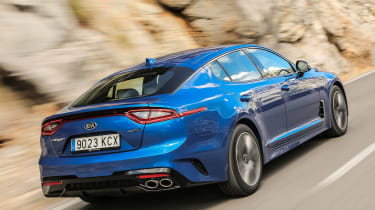 Performance is on par with most of its rivals (Kia is targeting the likes of the BMW 4 Series Gran Coupe and the Audi A5 Sportback), while it’s relatively agile, too. It doesn’t feature the clever tech that makes its more potent sibling impressively nimble given the Stinger’s size, but the diesel version still changes direction sweetly.

There’s good grip and the steering is well weighted when in the Normal driving mode, although it’s short on feedback. The sportier settings of the five different modes ramp up steering weight a little, but not too much, while the chassis set-up isn’t altered as adaptive dampers aren’t available.

Despite this, it rides over broken surfaces quite nicely. The Stinger is supple, making it extremely usable. The eight-speed auto shifts without any great urgency, although it’s quick enough, and again, it’s smooth and refined. Refreshingly, this theme runs through the Stinger, and it’s all the better for it. 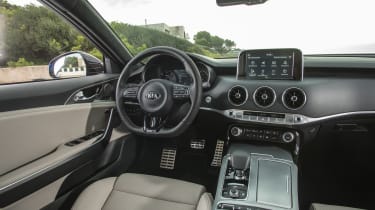 Traditionally, another Kia theme is value. While the £37,095 Stinger stretches this, you get plenty of kit for your cash, with LED lights, heated front and rear leather seats, a 360-degree monitor with front and rear parking sensors, wireless phone charging, and an eight-inch infotainment system with Apple CarPlay and Android Auto. Some of that kit would be optional on its German rivals. It’s all well integrated, too; the Stinger feels solidly built, even if a few areas lack that final degree of polish.

So the all-new Kia coupé makes a decent fist of matching but not bettering key cars in this class in most areas, although it falls down in a significant one: efficiency. It’s a shame given this diesel variant is likely to be used as a business vehicle by many people, so while claims of 50.4mpg and 147g/km CO2 emissions aren’t bad, they’re still behind the best models in the class.

At least with a big, electrically operated hatch revealing a 406-litre boot and an acceptable amount of room in the rear despite that tapering roofline, the Stinger doesn’t compromise on practicality. And with kit such as autonomous braking, lane keep and blindspot assist, as well as rear cross traffic alert on this GT-Line S trim, the car will be safe family transport.