Despite the smaller engine and lower list price, Kia’s most affordable Stinger retains much of its charm 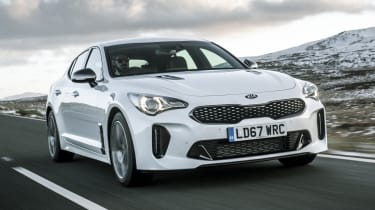 Much of the flagship Kia Stinger’s charm remains intact, despite the smaller engine and lower list price. The sweet rear-driven chassis and agile handling are unaffected, while the kit-laden interior and coupe styling are almost indistinguishable from the range-topping version. The cool Kia will have a fight on its hands to topple the best German executives, but if you can stomach the higher running costs, it’s certainly worth a look.

The rise of the Kia brand has been well documented over the past decade. While its superminis and small cars have gone from strength to strength, its crossover and SUV range now totals a not-insignificant five models.

But it’s the Stinger that represents the final piece in the firm’s complex and ever-expanding puzzle. The halo model launched last year with a powerful 3.3-litre V6 engine, but only now are the more modest four-cylinder cars starting to arrive in showrooms.

We tried the 2.2-litre CRDi diesel in Spain previously, but with industry attitudes changing, Kia has high hopes for the turbo petrol version you see here. In GT-Line spec (as tested) it’s the most affordable Stinger on sale, too, with prices starting from just £31,995. 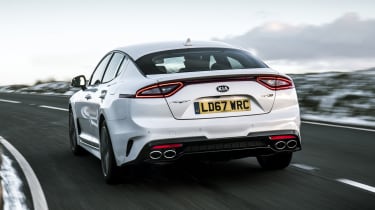 For that, you get a kit list long enough to make BMW and Audi drivers wince. Almost everything you’d want is included; from the 18-inch wheels to the eight-inch touchscreen sat-nav and electrically-operated driver’s seat. In fact, the only thing that might leave you wanting is the slightly rudimentary halogen headlamps. LEDs come as standard on GT-Line S cars.

It’s not slow, either. With 244bhp, the Stinger 2.0 T-GDi will sprint from 0-62mph in six seconds flat and hit 149mph at the top end. The power delivery doesn’t feel as urgent as in some of the Kia’s German rivals, but as the revs build, you’ll find yourself pushing on faster than you might expect.

Everything we love about the flagship Stinger’s handling rings true in this basic car, as well. The sharp rear-wheel-drive chassis and precise steering are retained, while the gearbox shifts quickly and smoothly, too. The way the head-up display switches from conventional type to italics when you place the car in Sport mode is a bit gimmicky, but if that bothers you, it’s simple to switch off.

The Stinger rides well, too, despite the fact it’s not available with adaptive dampers. Thanks in part to the smaller 18-inch wheels, the Stinger never crashes over potholes, while high speed refinement is also excellent. Of course, you don’t get the same sense of quality as you might in a 3 Series or Mercedes C-Class, but the cabin feels well screwed together and built to last.

The leather is suitably sumptuous, but the seats themselves lack support for longer journeys – after 200 miles behind the wheel we walked away with a mild ache in our lower back. Still, the infotainment system is perfectly logical, and the climate control buttons are within easy reach. 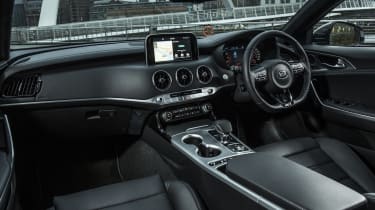 While that coupe shape means the Stinger has more road presence than a conventional saloon, space in the back is affected. Headroom is limited for taller adults, while our car’s black interior meant it felt very dark in rear. The seats fold 60:40, though, which helps when loading longer items into the boot.

Perhaps this Stinger’s biggest issue is its running costs. Diesel might be falling out of favour, but there’s no avoiding the fact that Kia’s 2.2-litre CRDi is much more economical for high-mileage drivers. We managed a respectable 34mpg during our time with the petrol model, but an identically equipped diesel should return more than 50mpg in mixed motoring.