Volkswagen Arteon vs Audi A5 Sportback 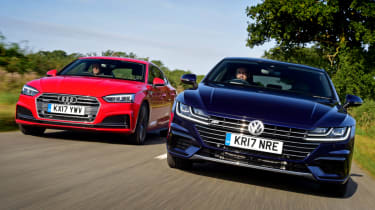 New VW borrows from the Passat formula, but takes the fight to posher rivals. We find out if it can crack the premium market. The Arteon isn’t a direct replacement for the Volkswagen CC, but it follows a similar formula, because it’s based on the same MQB platform as the Passat. Yet it’s available with a different set of engines, including the powerful 237bhp 2.0-litre biturbo diesel in our test car.

It has a seven-speed dual-clutch DSG gearbox and four-wheel drive as standard. In top-spec R-Line trim – which adds some special styling add-ons, including 19-inch wheels, a sportier front bumper and a gloss black tailgate spoiler – the car costs from £39,955. 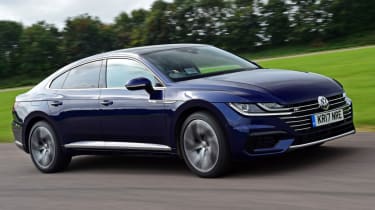 Volkswagen is doing its best to present the Arteon as being a separate car from the Passat on which it’s based, but as soon as you get inside you can see the family connection.

That’s no bad thing, because the interior has an elegant, high-quality ambience – crucial in this company, because the VW manages to feel nearly as upmarket as the Audi. There are a few hard plastic surfaces, but it’s nothing you can’t ignore.

The dash has a clean, modern look, especially with our car’s Discover Navigation Pro system, with its 9.2-inch touchscreen. The Active Info display between the dials is as functional and up-to-date as the Virtual Cockpit in the A5 Sportback, too. 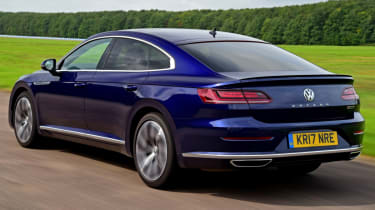 So the interior is a winner, but the exterior is what really impresses about the new range-topping Volkswagen. The LED daytime running lights and wide grille give it real presence, and the swooping roofline is even sleeker than the Audi’s. We love the way the Arteon looks, and that’s a big factor when you’re buying a four-door coupé like this.

Another important area is performance, and the VW even managed to steal the win over the A5 here as well, despite having a four-cylinder engine to the A5’s V6 unit. It’s more powerful, with 237bhp (the Audi has 215bhp), but because it’s the heavier car the performance it has is really impressive.

At the track we recorded a 0-60mph time of just 6.1 seconds (the Audi took 6.3 seconds), but it’s the in-gear figures that are key for these stylish cruisers.

In third, the Arteon took just 2.3 seconds to cover 30-50mph, while the A5 dispatched the same sprint in 2.5 seconds. Both cars felt blistering in that test, with a wave of torque from their boosted diesels. 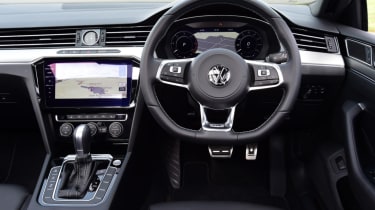 Motorway overtakes will be easy in either model, but the VW won out here as well. In sixth gear it took just 5.1 seconds to go from 50-70mph, where the Audi took 8.8 seconds.

That’s down to the longer gearing in the A5 Sportback; at 70mph in top gear, it showed just 1,500rpm compared with the VW’s 1,900rpm. The gearing did help the Audi to be more economical on test, however, despite having a 3.0-litre engine. It recorded 40.8mpg, but the Arteon wasn’t too far behind: it returned 38.7mpg in our hands.

Our sound meter tests showed the Volkswagen is also noisier than the Audi. At 30mph the Arteon was 3dB louder inside compared with its rival, and 2dB louder at 70mph. VW has added fake engine sound, too, but it’s an unpleasant noise and the four-cylinder is no match for the A5’s smooth V6 when it comes to aural appeal. And what’s under the bonnet can be a deal breaker for many buyers.

• Satellite navigation: All Arteon models are fitted with an eight-inch touchscreen that includes VW’s Discover Navigation system. Our car had the optional 9.2-inch Discover Navigation Pro package• Transmission: VW’s dual-clutch gearbox is quick to change in auto mode, but there’s a lag in manual• Technology: Active Info Display offers digital dials and is as good as Audi’s Virtual Cockpit set-up 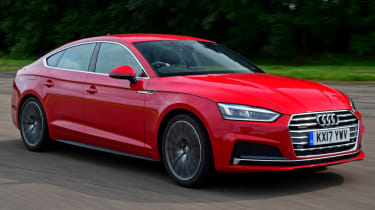 • For: Smooth V6 engine, excellent interior, cheaper to run than the Arteon• Against: Not as roomy as the VW, not that much fun to drive, small rear seats

While the latest Audi A5 Sportback’s styling didn’t move on a great deal from the previous-generation car, we’re still fans of the way it looks. There’s an understated quality to the shape but it’s still handsome, and it still has one of the best interiors in its class. Although the infotainment system feels a bit older than the touchscreen in the VW, the Audi’s cabin is modern, fresh and comfortable to sit in.

The Audi’s ride is soft as well, with the £600 adaptive dampers fitted to our car in comfort mode. However, the Volkswagen’s standard-fit Dynamic Chassis Control suspension is softer still, and while it doesn’t firm up as much in the Sport setting as the Audi, it’s actually better suited to UK roads.

Both models tighten up enough to resist body roll, and while neither is particularly fun to drive, the Arteon’s softer edge helps give you extra confidence on a bumpy road. The VW is softer in its comfort setting as well, but the difference is fairly small overall and both are comfortable cruisers. 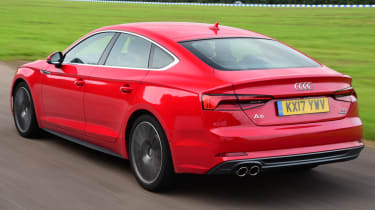 Both cars have four-wheel drive, so there’s loads of grip, but with a heavier V6 in the nose, the A5 doesn’t turn into corners as well as its rival. However, the driving experience isn’t far behind, and it’s helped by the fact that the Audi has the more enjoyable engine of the two.

While the Arteon’s 500Nm torque figure meant the 400Nm Audi trailed in-gear, the big engine ensures the A5 is faster flat-out from 30-70mph. It took 5.5 seconds to do the sprint, while the VW completed it in 5.9 seconds. The Audi feels more settled at high speed as well; it’s clear this car was designed by engineers used to German autobahns.

The Sportback loses out to its rival here for practicality, because it has a smaller boot – 480 litres to 563 litres – as well as less space for passengers in the rear. There’s a bit more headroom in the Audi because the VW’s roofline cuts into space in the back; in contrast the Arteon offers loads of rear legroom, where the A5 Sportback feels a little tight. 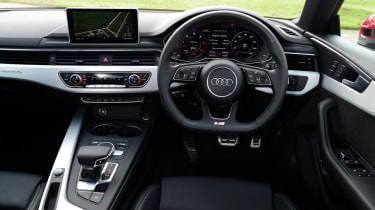 You’ll also have to spend more time filling up the A5 because it has a smaller fuel tank, but on the bright side, it was more economical in our test. It’s much better off in terms of depreciation as well, which means it’s cheaper to buy on a PCP deal than its rival (see Through the Range, opposite).

However, the A5 isn’t as well equipped as the Volkswagen, so you’re likely to have to add options that will send the price up. The Virtual Cockpit digital dials and adaptive dampers are must-have extras, but since both are standard on the Arteon the A5 doesn’t look such great value.

• Sat-nav: Features such as satellite navigation are standard on the A5’s touchscreen infotainment system. The car has the edge over the Arteon for interior quality, too• Transmission: Audi’s tiptronic gearbox works smoothly in auto or manual modes, but doesn’t shift as quickly as Volkswagen’s DSG• Technology: Optional Virtual Cockpit digital dash is superb and shows all the information a driver needs 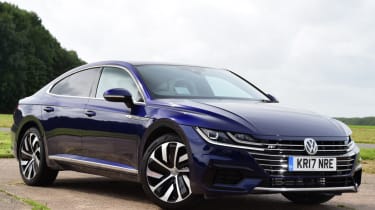 VW's Arteon four-door coupe is a bit noisier and more costly to run than the A5 Sportback, but it’s got more kit as standard, looks great, is more comfortable and better to drive than its rival. It’s close enough behind the Audi on running costs, while beating it in those other areas, to narrowly take the victory here. 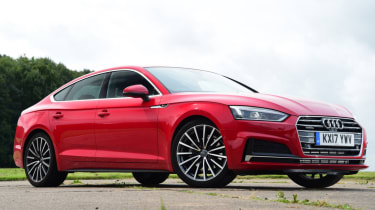 There's not much in it, because the Audi A5 Sportback is comfortable, powerful, economical and handsome; it’s just not as well equipped or as good to drive as its rival. We love its top-quality interior and strong residual values are good for both cash buyers and those choosing PCP finance.