How does the stylish Volkswagen Arteon coupe suit the Golf's 1.5-litre TSI petrol unit? We find out... 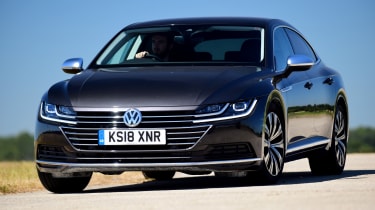 As each sector slowly switches from diesel to petrol power, cars like this Arteon TSI will win favour by default. But that’s not to say it isn’t worthy of your consideration – this sleek four-door coupe makes for a perfectly plausible company car. The TDIs are stronger still, but if you cover relatively few miles, it’s well worth a look.

Bar the big SUV segment, it’s the high-mileage executive car buyers that will surely be among the last to switch from diesel to petrol power. For many, the superior fuel economy of a diesel car still pays dividends when it comes to keeping a lid on day-to-day running costs.

But, if you’re desperate to avoid the four per cent Benefit in Kind (BiK) diesel tax hike, or simply want to future-proof your new car purchase, there’s a range of tempting petrol options in the mid-size saloon sector. As such, VW has just launched its slickly-styled Arteon coupe with the Golf’s 1.5 TSI turbo engine.

It’s also an appealing proposition for private car buyers. On one of VW’s fixed PCP deals, the 1.5 TSI DSG is around £43 per month cheaper than a similarly specified 148bhp 2.0 TDI. Go for the less expensive manual and the difference is bigger still.

At tickover, the Arteon emits barely a sound, and little changes as you pull away. Only when you really rag the small capacity petrol engine do you notice it’s there; on the motorway it settles to a subdued cruise with little in the way of wind or road noise.

Performance is adequate rather than ferocious. The 0-62mph sprint takes 8.9 seconds, and in reality that feels about right; it’ll accelerate up to the national speed limit as fast as you need it to, but without any drama or fuss. 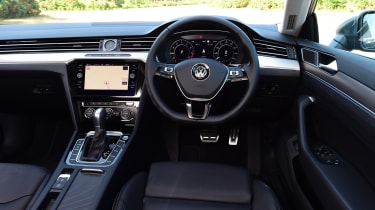 The TDI is punchier in-gear, with the ubiquitous torque reserves particularly useful when overtaking. If you spend a lot of time on the motorway, you might miss the flexibility of a modern-day diesel engine. The petrol car will use more fuel, too, with economy at a claimed 48.7mpg versus 62.8mpg in the diesel.

With a little less weight over the nose, this TSI version handles sweetly, though the steering is still a little light and there isn’t much feel. Body control is good, however, and it rides well even on passive dampers.

While we’ve not tried this engine with the six-speed manual box, our experience with VW’s DSG is that the standard (and cheaper) set-up works best. The auto can be a little hesitant when you suddenly ask for full throttle – and pulling away from a rolling start isn’t always as slick as it should be. Once you’re up and running, however, the DSG box slurs its changes with delicious efficiency.

Of course, the rest of the Arteon package is unchanged. That means you still get a choice of well-equipped Elegance or sportier R-Line trims, with all cars boasting an eight-inch colour touchscreen, three-zone climate control and self-levelling LED headlights. Also included is VW’s interpretation of the Audi Virtual Cockpit system – a 12.3-inch customisable screen replacing the traditional analogue dials. They look great and only add to the Arteon’s up-market appeal.