Confused about the new diesel tax increases? Read on for a clear and comprehensive explanation 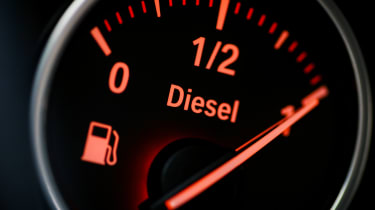 New diesel tax rates, which come into force as of April 2018, mean that diesel cars are taxed more heavily, but which cars and by how much can be a matter of confusion.

Which is understandable given the complexity of the new legislation surrounding diesel car taxes – but the first thing to know is that for most people buying a new diesel car, any price hikes will be relatively minor.

As road tax applies to everyone, we’ll deal with that element first.

The VED increase for diesel cars applies only to new cars purchased on or after 1 April 2018. From that date the amount you pay for the first year of road tax, and only the first year, increases by one tax band.

Unlike annual road tax, which is fixed at £140 a year for most cars, first-year VED rates are still based on carbon dioxide (CO2) emissions.

As an example, if a new diesel car emits between 111 and 130g/km (grams per kilometre) of CO2, under the old system you would make a one-off road tax payment of £160 for the first year. From 1 April that same car will cost £200 to tax instead. One example of a car that emits that sort of CO2 is a Nissan Qashqai 1.6 dCi 130, so people buying the Japanese SUV after April 1st will pay £40 more for their first year of tax than people who bought one before that date.

The highest first-year tax increase for diesel cars is £500, and this comes if the new car you are buying emits between 191 and 225g/km of CO2. That’s a lot of CO2 for a diesel car to emit, but the diesel Bentley Bentayga would fall within that band.

The Government has updated the label for new cars (below) to help clarify their eco credentials to consumers. 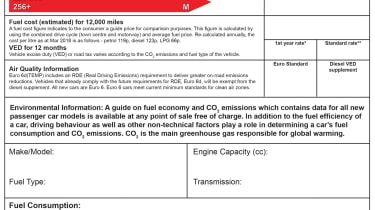 Some dealers bundle first-year road tax rates into personal contract purchase (PCP) agreements, and all on-the-road-prices include first-year VED – so most car buyers may not notice much of a difference in cost anyway.

It’s also worth pointing out that after the first year of road tax is paid, diesel cars will be charged the same as petrols meaning your £140 annual bill remains the same, whichever of those two fuels you choose.

Some unusual caveats apply, though. If the car costs over £40,000 or more, additional taxes (£310 extra per year, for years two to six of the car’s life) come into play – but that’s not related to whether it runs on petrol or diesel, it applies to cars.

Just to make life slightly more complicated, most first-year road tax rates – for both diesel and petrol cars – have gone up due to inflation – though the standard annual £140 VED rate is unaffected by this.

Take a look at the table below if you want a full breakdown of the diesel road tax increases introduced in April.

RDE2 limits: are any diesel cars exempt from tax rises?

The HMRC calculations around which these increases work are based on a new emission standard called RDE2 – short for Real Driving Emissions, stage 2.

In theory, if the car in question meets or undercuts RDE2 NOx limits, it will be exempt from these increases.

The issue is that RDE2 limits don’t have to be met by carmakers until January 2021, so carmakers haven’t been trying to meet them with current models. As a result, all diesel cars on sale today will be subject to the hikes detailed above.

While the first-year VED increases are relatively minor, one-off hikes, the Benefit-in-Kind rate rise is an annual rolling tax hike for diesel cars – and it’s retrospective, too, so all diesel cars registered on or after 1 January 1998 will be affected – though diesel hybrids are exempt from the increase.

The BiK diesel tax hike comes in just after the road tax changes – 6 April not 1 April. It means any new diesel car registered from then will be subject to a 1% increase in the diesel tax supplement (from 3% to 4%) you’ll have to pay.

Back-of-a-napkin calculations mean someone on £40,000 a year driving a diesel Audi A4 and making no employee contributions or no payment for private use will pay £1,840 a year in Benefit-in-Kind rates, as opposed to the £1,737 they were paying previously.

Once again, diesel cars meeting the RDE2 standard would in theory be exempt from the tax increase, but none are on sale at the moment.

Want to learn more about VED? Then take a read of our explain-all article here.