It's always difficult to pigeonhole the 4 Series Gran Coupe, but how does this four-wheel-drive top-spec diesel variant measure up? 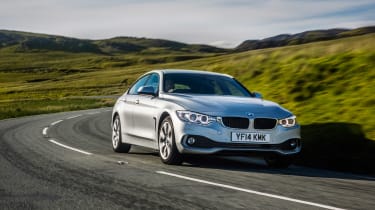 For many, the rear-wheel-drive 4 Series will suffice, and most will make do with the fast but frugal 420d. But for those wanting a versatile rocket ship with bags of style and unflappable grip, then the 430d xDrive Gran Coupe is a very impressive package. It feels genuinely quick and the kit list is generous, too.

There’s nothing new about the way this BMW 4 Series Gran Coupe looks. It’s yet to benefit from the 3 Series’s visual and mechanical nips and tucks, while it gets the same well-built, if a little mundane, interior.

However, underneath the familiar bodywork, BMW has fitted its legendary 3.0-litre straight-six diesel engine with four-wheel drive. It’s the first time we’ve driven it in the UK, with BMW hoping its Audi quattro-rivalling tech can snap up a few last-minute sales before the warmer weather sets in. 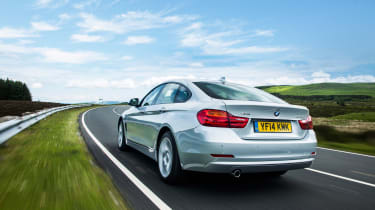 Initial impressions are good. This thing is quite simply a rocket ship. It’ll sprint from 0-62mph in just 5.3 seconds (three tenths faster than the rear-drive car), while the whopping 560Nm torque figure means pick up from 40-50mph is frankly astounding. Lose concentration even for a second and it’ll have you doing illegal speeds.

The extra grip is welcome in bends, too. Our car was fitted with winter tyres, so on warmer days it felt a little disconnected, but as the temperature plummeted, the 430d came into its own. The xDrive system sends 60 per cent of its power to the rear most of the time, making it feel much like a normal BMW from behind the wheel. As road conditions get trickier, however, it can push more torque to the front to shore up grip where it’s needed most. It’s a really well sorted system, and at times can show an all-wheel-drive Audi a clean pair of heels.

The car you see here also benefited from BMW’s excellent adaptive dampers. It allows the BMW 430d to float down a motorway in complete comfort, toning up as you flick it into Sport or Sport+ mode for twistier sections. It’s a £515 option, but well worth the extra cash.

Fuel economy and emissions do suffer slightly for those added driven wheels. Our car claims 51.4mpg and emits 145g/km of CO2. The rear-wheel-drive model has official figures of 53.3mpg and 139g/km – putting it one band lower for road tax and two Benefit in Kind brackets down for company car drivers (27 per cent versus 25 per cent). This xDrive version is £1,515 more expensive to buy than a rear-wheel-drive 430d, too. 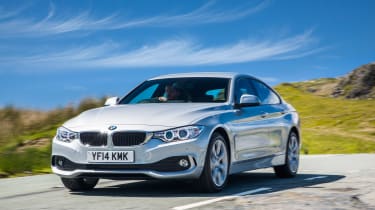 But realistically, those wanting superior fuel economy and lower emissions are better off looking at the even cheaper yet still brilliant 420d xDrive. It costs around £5,500 less and pushes fuel economy closer to 60mpg. Anyone craving more power should consider the 435d xDrive, which can sprint from 0-62mph as fast as a Ford Focus RS, while still returning 49.6mpg.

Standard kit is good, as you’d expect. This high-spec 430d is only available in Luxury or M Sport trim, but equipment includes sat-nav, DAB radio and BMW Emergency Call across the range. Our car also gets full-leather upholstery and 18-inch wheels.