The BMW 4 Series range has been updated for 2017, and we try out the best-selling 420d version on UK roads 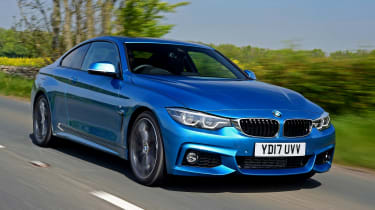 New lights and some updated interior trim hardly transform the BMW 4 Series, but this new model is as good as ever. It’s better to drive than its rivals, looks great and this 420d model offers a top balance of performance and economy, while also being comfortable and quiet on the road. Most will prefer the excellent auto to our manual test car, but keen drivers shouldn’t overlook the extra satisfaction this one offers.

A relatively minor round of updates has hit the BMW 4 Series range, and new models now feature some new head and tail-lights, plus a slightly different bumper design and some more in-car tech.

We’ve already driven the range-topping 440i on wet and icy European roads, but now we’ve got the best-selling 420d version in Britain to see if it’s still our top pick in the extensive model range. It has always offered an impressive mix of performance, refinement and economy, and little has changed for this new model.

BMW has updated the chassis slightly as well, although we found it tough to notice any difference at all over the pre-facelift version. That’s not bad news, though, as the 4 Series remains top of its class to drive, beating the Mercedes C-Class Coupe and Audi A5 Coupe when it comes to driver involvement. 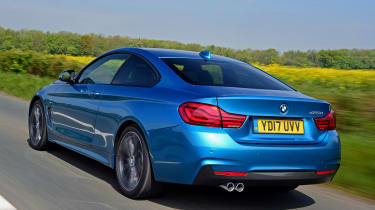 Our manual test car isn’t the one most buyers go for, as it appeals more to the heart than the head. It’s fun to change gear yourself and adds to the involvement, but the automatic is probably the better car, if only to make stop-start commutes more pleasant. It’s more frugal too; the manual will return 62.8mpg, while the auto does 65.7mpg.

The 420d’s steering isn’t as sharp as it could be, but the responsive and agile feel you get on a quick road is unbeaten in this class. The low, sporty driving position and well-judged control weights mean it feels fun no matter how quickly you drive. That doesn’t come at a cost to the ride quality, as while it’s not as supple as the Mercedes, it’s still composed and smooth even on bumpy roads.

Performance is great too, and even though you can get a potent six-cylinder 435d model with 308bhp, the 2.0-litre has more than enough shove, and it’s great for overtaking as well. Plus, it’s quieter than the rattly old 2.1-litre diesel engine in the C-Class.

As standard, the new 4 Series still uses the smart-looking and elegant physical dials with part cut out to display data such as fuel economy and range. You can now get a digital display for £295, however, adding extra functionality such as sat-nav directions and trip information. However we’d stick with the classy-looking standard dials and specify BMW’s colour heads-up display instead. 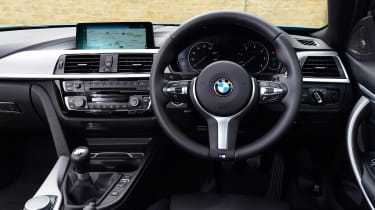 An 8.8-inch display screen with sat-nav is standard on M Sport cars (the top-selling trim in the UK), and it’s now kitted out with the latest-generation software. There are a few new features, but on the whole it’s a similar system to before, and one that works very well. It’s simple to control; BMW has avoided switching to a fiddly touchscreen.

There are also some new interior colours and trims to choose from, as well as some new alloy wheel designs. That means 4 Series owners looking at their next three-year deal will have something new to choose from – but it won’t be a deal maker for most buyers.