Four-seater BMW 440i coupe finally gets the same updates as the 3 Series, but have they made a difference? 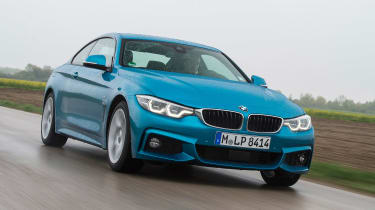 Little has changed to alter our opinion of the 4 Series as an overall package. Minor styling tweaks and tech updates will find favour with existing owners, but do little to win over new customers. Still, it remains one of the best four-seat premium coupes around, and in 440i form it’s also genuinely fast. The 435d is a better all-round choice for those looking for pace, grace and low running costs, however.

It’s been nearly two years since BMW revealed a facelifted version of the ever-popular 3 Series. Yet, bizarrely, the maker has waited until now to apply the same changes to its two-door 4 Series. We’re driving the range-topping 440i petrol to see if it remains one of the class benchmarks, even in the face of rivals like the new Audi A5 Coupe.

You can see why BMW wasn’t in too much of a hurry to bring the 4 Series up to date with its four-door sibling; it’s still a great looking design. BMW claims 2,500 components were changed for 2017, although you’d be hard pushed to notice at a glance. Keen eyes may spot the new full-LED headlamps (with optional adaptive beam tech), revised front and rear bumpers, and fresh alloy wheels. 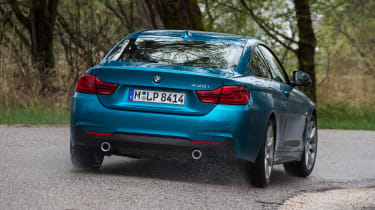 Most will spot the vibrant new colours, however – particularly in the case of the Snapper Rocks Blue of our test car. It’s a similar (if not identical) hue to the launch colour of the BMW M2, and gives the larger 4 Series a welcome dose of character.

Step inside and again, you’ll need to stare long and hard not to miss the tweaks. The air vent surrounds and some of the centre console switches have a new chrome finish, while there’s extra black gloss trim on the dash and new leather choices. The optional Professional sat-nav system also features a fresher interface, with tile icons for the main menu that were first seen on the new 5 Series. Audi-style digital instruments are optional, too.

It’s just as easy to use as before, and the rest of the interior is as logically laid-out and driver-focused as it’s always been. Granted, some of the finishes lack the polished look and feel of the Mercedes C-Class Coupe, but the driving position is spot-on and there’s space for two adults in the back. 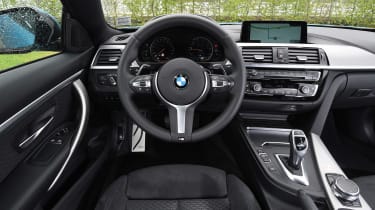 BMW hasn’t revised the 4 Series’ engine range for 2017, as it’s already been gifted the updated units from the 3 Series. Instead, changes have been made to the suspension, with a stiffer tuning for both the standard and adaptive set-up, all aimed at improving handling and steering. Our car had the adaptive system, and the differences were so subtle we reckon you’d have to drive the new car back-to-back to feel any change.

Nevertheless, the 440i remains one of the most entertaining drives in its class, finding the sweet spot between ride comfort and sharpness. Combining that with the sweet-sounding 322bhp turbo straight-six engine creates an excellent GT car that is one of the strongest fast petrol coupe packages around. Fuel economy of 41.5mpg makes it cheaper to run than its closest rivals, too.