Vintage Ferrari 250 in competizione to join the most expensive cars 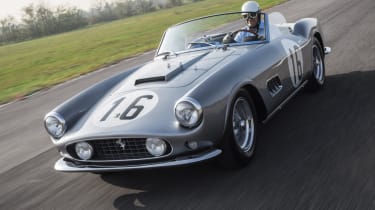 A 1959 V12 Ferrari 250 GT LWB California Spider Competizione, is about to take its incredibly long name and rich motorsport heritage, to the RM Sotheby’s auction in New York. The estimate is $14m to $17m so all being well, the car could end up selling for as much as £13million, enough to see it claim a place among the most expensive cars ever sold.

The Ferrari (chassis number 1451 GT) was originally built to compete in the 1959 Le Mans 24-hour and had been off the production line for no more than 5 days, before it was tearing up the tarmac at the world’s oldest endurance race.

What’s more, while 1451 GT made it to the race, its driver and owner at the time (a Mr Bob Grossman), recalled that the exterior had but a ‘flash’ of paint covering the primer, and that there were ‘rags’ covering the unfinished seats. Quite different, in other words, from the car which has since been professionally restored not once, but twice, and also granted Ferrari Classiche certification. 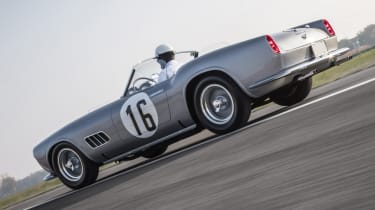 Being Competizione spec means that 1451 GT is one of only eight, aluminium bodied 250 GT LWB California Spiders. Under the bonnet, the 3-litre Tipo 128F engine produces 263bhp at 7,300rpm, and has triple DCL6 carburettors connected to a competition-spec fuel tank, which aims to keep this italian horse prancing at full chat for as long as possible.

At its first race, Bob and his co-pilot managed 294 laps, securing 5th pace overall and 3rd in their class, which wasn’t bad considering it was the driver’s first outing at Circuit de la Sarthe ever. The car was retired from racing a little over a year and 17 races after Le Mans, before being sold on to the next lucky owner.

However, after years of passing between owners, restoration and spending time on both the circuit and carpet, 1451 GT is once again for sale. Will it be bought for historical racing, road use, or as an investment? Who knows, but what we do know is it is one incredibly good-looking car.

Would the 250 GT LWB California Spider Competizione be on your shopping list if you had £13million spare? Let us know in the comments below.