Ken Block has unveiled the livery that will adorn his 90s Ford Escort RS Cosworth at a trio of US stage rally events later this year.

Block will compete in the RS Cosworth he bought back in October at the Oregon Trail Rally, New England Forest Rally and Idaho Rally International in 2018.

The 1991 Group A model features a a 7-speed sequential gearbox and an upgraded 2.0-litre turbocharged WRC engine from 1997, producing 395bhp and 549Nm of torque. 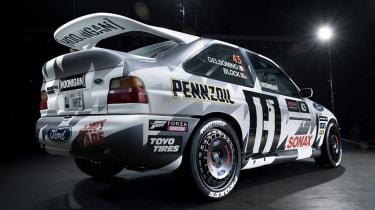 The RS Cosworth’s new livery is the work of artist Death Spray Custom, who was tasked with giving the car a “slight retro feel” while sticking to Block’s lightning bolt theme.

Having stepped back from full-time World RX duties at the end of last season, Block intends to incorporate the newly formed Americas Rallycross Championship into his programme for 2018.

Several Gymkhana events also feature in his 2018 calendar, and Block will even participate in one round the World Rally Championship behind the wheel of an M-Sport prepared Ford Fiesta RS RX.

“I’ve really enjoyed the past few years of rallycross, but I started my race career with rally and my heart has always been with it,” he explained. “So to be able to get back into doing events like these while still doing some rallycross makes me very happy!

“I love my old Cossie and I’m looking forward to going and pushing that a bit here in America during some events, but then I’m going to the opposite end of the spectrum with the current 2017 WRC Fiesta, which I think is going to be a lot of fun for WRC Spain.”