Ken Block's Gymkhana: the videos 1-9, cars, drifts and everything you need to know

Stunt driver and “Hoonigan” Ken Block has risen to fame with his Gymkhana videos. We round up the series from Gymkhana to Gymkhana 9…

Stunt driver, rally star and all-round automotive nutcase Ken Block is at it again - the latest Gymkhana video has dropped online. 'Gymkhana 9: Raw Industrial Playground' is situated in (you guessed it) a huge industrial area including a harbour, several warehouses and a train.

Gymkhana 9 will also soon be available for virtual reality or 360-degree viewing, and was sponsored by the upcoming racing game Forza Horizon 3.

Block's become known for the Gymkhana videos which typically show him and an all-wheel-drive rally-spec car performing a succession of tyre-smoking stunts for the camera. The Gymkhana vids are compelling watching as the millions of YouTube viewers will agree and since the first was released in 2008 they have elevated Ken Block to crazy heights within the car world. The latest video is more of what's come before - but better.

We first knew that Block was going to use a Ford Focus RS-based rallycross car for Gymkhana 9 because it was actually teased at the end of Gymkhana 8. Complete with 660hp (651bhp) and 895Nm of torque. The 0-62mph time is reportedly under two seconds - about as fast as a Formula 1 car to the same speed. 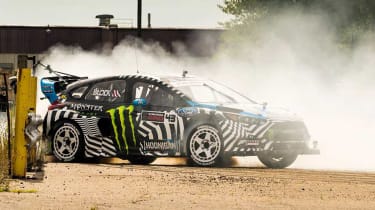 The previous video, Gymkhana 8, was filmed in Dubai and features Ken Block in an all-new Ford Fiesta ST RX43 rallycross car. Equipped with the usual four-wheel drive, the RX43 has a turbocharged four-cylinder petrol with a ridiculous 650bhp. That's enough to propel it around Dubai at ludicrous speeds, drifting, donutting and doing some massive leaps around the city.

The Fiesta car was finished in a special reflective covering that changes as the light hits it, revealing a ragged stars and stripes motif. Inside, it's the usual stripped-out innards of a rally car, but Block has customised it somewhat with a classy gold handle for the sequential gearshift.

Who is Ken Block?

If you have the internet (which you probably do if you're reading this), are a rally fan or have had any interest in the development of the new Ford Focus RS, you’ve probably heard of Ken Block.

For the uninitiated, Mr Block is a professional rally driver at heart but he’s most famous for his regular Gymkhana videos that involve a mega-powerful rally car and specially chosen location. The Gymkhana series is the peak of motoring excess, giving car fans what (it seems) they really want. Block slides, jumps, spins and speeds his way through complex obstacle courses reducing his tyres to smouldering wrecks on the way.

Born in California, 48-year old Block has always been involved in sports from a young age, including snowboarding, motocross and skiing.

Block lives in Utah in a house with its own private snowboarding park, dubbed DC Mountain Lab. He has two dogs, Yuki "the Destroyer" and Bentley and, given his partnership with Ford, he owns a Ford F-150 Raptor pick-up truck fitted with tracks to tackle the snowy mountains.

He co-founded DC Shoes in 2004, a sportswear company famous for its links with action sports like skateboarding and snowboarding. After the business grew and was aquired by Quicksilver (another sportswear brand) Block remained Chief Brand Officer for several years.

He's been in the rallying business for the past 10 years. He’s been in five Global RallyCross Championships, going up against drivers like Tanner Foust of Top Gear US fame, and has even entered World Rally Championship events.

Recently, Block has been involved in the development process of the all-new Ford Focus RS as well as starring in the 'Re-birth of an Icon' series that drip-fed us unformation on the new mega hatch prior to its launch. Block also blasted the new car up the hill climb at the 2015 Goodwood Festival of Speed.

The term ‘gymkhana’ originates from a specific type of horse racing, which involves timed events and racing in certain patterns. The most common type of gymkhana event is ‘barrel racing’ where riders on horses are timed on how quickly they can get around the course. The horses (and riders) are meant to go completely around three well-placed barrels as quickly as possible before they can cross the finish line.

In car terms, it's very similar. Motorsport gymkhana events consist of drivers performing stunts like massive drifts, donuts and jumps against the clock. They must memorise the course in order to get the best time, as speed is just as key as driving skill.

This is the foundation for Block's videos: stunts, driving fast and generally showing off. The only difference is that Block's attempts take the genre to a whole other level of crazy.

In fact, in his first official Gymkhana video, Ken Block gives a full definition of the sport in car terms: "An automotive sport that takes place on an open field or parking lot and requires drivers to skillfully manoeuvre their cars around a series of cones, 180-degree turns, 360-degree turns, figure eight turns or other obstacles using acceleration, braking or drifting."

The 'practice' video was the first time we saw Block's sheer hooliganism. Equipped with his Subaru Impreza WRX rally car and a completely empty airfield, we watched his mastery of car control for the first time.

Gymkhana 2 was a more refined and well polished video, if you avoid the shameless product placements from DC Shoes. This one featured Block's 566bhp 2009 Subaru WRX car and enough explosions to cause a small earthquake.

Gymkhana 3 saw Block hop the pond in his 650bhp Ford Fiesta. The 'Ultimate Playground' video was filmed just south of Paris at at l'Autodrome de Linas-Montlhéry. The track is a little like the Millbrook testing facility in the UK, as it has an enormous banked circuit and enough room to thrash a car to its absolute limit.

For Gymkhana 4, Block brought it back home to California. Using the backlots from Universal Studios, the video features cheesy movie production values, behind the scenes action using moving forklifts and even a surprise cameo from Jaws.

Filmed on the streets of San Francisco, Block had to use his insane driving skills to meander around the city's trams and tackle San Fran's famously steep streets with hilarious entry speeds in Gymkhana 5. Huge jumps also feature... a lot.

Block took it back to basics with Gymkhana 6, using an old airfield strewn with static and moving obstacles. Oh and a spikey wrecking ball... just to keep things interesting.

After several stints in his trusty Fiesta, Block ditched it for a a rat-rod Mustang for Gymkhana 7. The 845bhp Mustang, nicknamed the 'Hoonicorn', was thrown about the streets of Los Angeles in the 12-minute video (his longest yet).

The 'Ultimate Exotic Playground' of Gymkhana 8 was situated in Dubai, and even crazier than ever. He throws his rally-bred Fiesta around an apparently deserted Dubai. On the way, he takes in all the scenery, beginning in the desert and touring landmarks like the Burj Al Arab, the Palm Islands and the Atlantis Hotel. Not content with just a single car, Block's car dances its way around several million dollars worth of supercar - most of them in the liviery of the Dubai Police force.

What is your favourite Gymkhana? Let us know what you think below!