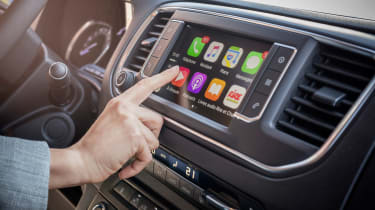 Apple CarPlay will allow drivers to use third-party mapping apps later this year, ending current arrangements that force CarPlay users to make do solely with Apple Maps for their route guidance needs.

The situation will change when Apple’s new iPhone operating system – iOS 12 – launches, bringing with it the ability to use third-party mapping when in CarPlay mode.

• Apple CarPlay - everything you need to know

The CarPlay system mirrors some elements of compatible smartphones on a car’s infotainment system screen. Most CarPlay setups require owners to plug their phones into a USB socket, but some – like the version offered on the latest BMW 5 Series – operate wirelessly.

While Apple Maps has been improved somewhat since its bug-ridden launch in 2012, it still trails Google Maps in some areas – not least because Google Maps’ significant market penetration means it can draw on more users’ data points to update traffic levels.

Other third-party apps will also work with CarPlay when iOS 12 comes along. The community-driven navigation app Waze (itself a Google subsidiary), for example, which allows users to report delays and incidents, will also be supported by CarPlay.

No launch date has yet been confirmed for iOS 12, but reports indicate it is expected to be revealed in September.

Do you use Apple CarPlay? Let us know your experiences below...