Carmakers to face emissions cheating fines of £50,000 per car 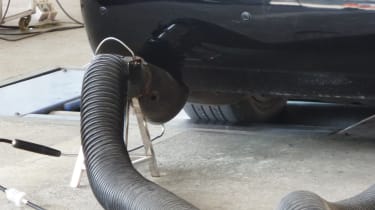 Carmakers will be fined up to £50,000 for every vehicle fitted with an emissions cheat device, after the UK Government set out details of a new set of laws.

The laws, dubbed The Road Vehicles (Defeat Device, Fuel Consumption and Type Approval) Regulations 2018, will see manufacturers facing a substantial fine if they “supply vehicles designed to cheat emissions tests to the UK”.

The new laws come into force on 1 July this year, following a consultation on the subject that began in February.

Announcing the new laws, Transport Minister Jesse Norman said: “There has rightly been a huge public outcry against car manufacturers that have been cheating on emissions standards. Their behaviour has been dishonest and deplorable.”

Norman added the new regulations had been designed to ensure that “those who cheat will be held to proper account in this country, legally and financially, for their actions.”

Emissions defeat devices feature chunks of software that identify when a car is being tested in laboratory conditions. When lab conditions are detected, the car’s electronic control unit alters the engine’s running behaviour in order to produce lower emissions and pass relevant tests.

The Government says Volkswagen, which was found to have fitted defeat devices to some of its cars, has paid £1.1 million to the Department for Transport for tests to determine if other diesel cars in the UK had been fitted with similar devices. The DfT found that no other manufacturer tested was “using a similar strategy.”

Responding to the government’s announcement, Mike Hawes, chief executive of the Society of Motor Manufacturers and Traders said: “Every new car sold in the UK meets the strictest of regulations governing everything from safety to emissions standards and how vehicles are tested and approved for sale.”

Hawes added that the government’s own testing of cars has “consistently shown them to be compliant”, adding he was “pleased government recognises that manufacturers have been rigorous in meeting the standards.” Hawes pointed out that “there have always been severe penalties for any manufacturer involved in any kind of misconduct in the type approval process carried out here in the UK” and said tighter emission regulations and government powers should “give consumers the confidence they are buying the cleanest and safest cars in history.”